What do Pringles and leadership have in common? 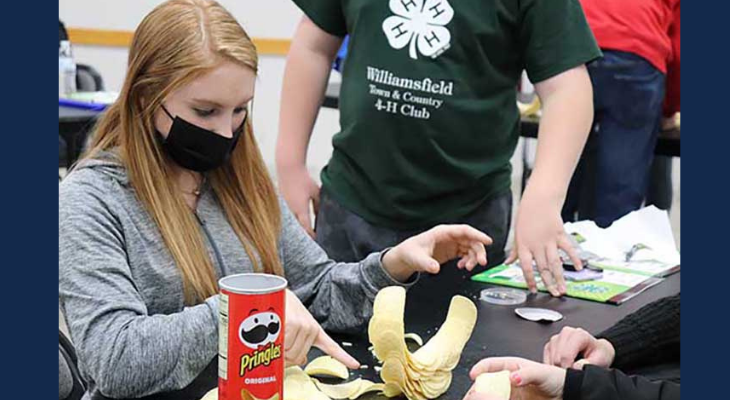 You aren’t the first person to ask, "What do Pringles have to do with leadership?" The conversation started as I pushed a cart full of Pringles cans to the local grocery store and said, “I work for 4-H” to the cashier as though that explained why I had 10+ cans of our favorite creatively packaged salty snack. The question continued as I walked into our office and was asked again when the agenda for 4-H Officer Training School read “leadership activity” and I placed a can of Pringles on each table.

The challenge I gave to each team of 4-H members was to build a freestanding ring using only a single can of Pringles and the combined brain power of their team.  Teams were not only racing against each other but also the clock to complete the task ahead of them. About this time I was asked again, “What do Pringles have to do with leadership?”

While these 4-H members thought they were trying to accomplish this challenging but completely possible task, the dynamics of working as part of a team were unfolding in front their eyes. In the first several minutes, the young people who had been randomly assigned were starting to move from being a group of strangers to a team.

After a few more minutes, several ideas on how to form the ring had been shot down. Some from an insight of an observing member of the team and others by gravity itself. Without a doubt, crumbs were all over the room, but so were ideas and opinions. The members had all found their role in the team. Some were the observer, watching how each move affected the goal. Others took on the role of directing the team in a single direction. There were also people thinking through the next step and those taking the action. The budding leaders we call 4-H members had formed a team. And the challenge I have given them? Well it had only accelerated what would occur naturally as they formed their new officer teams.

So what do Pringles and leadership have in common? It’s simple really. They both have the power to turn a handful of young people into a team and can help each other grow. With a can of Pringles, potential as a leader can be unlocked. With leadership, a can of Pringles can turn into a ring that stands on its own, taller and stronger than before. Pringles and leadership truly have a lot in common. And much more than just how much we enjoy them both.

ABOUT THE AUTHOR: Shelby Carlson provides leadership to the 4-H youth development program focusing on 4-H clubs, 4-H groups, and the youth education initiatives identified as state and local priorities in Henderson, Knox, McDonough, and Warren counties. Carlson joined University of Illinois Extension in 2018. Teaming with local 4-H program coordinators and volunteers, she plans, conducts, and evaluates programs that are consistent with the needs of local youth. Carlson provides programming related to college and career readiness, leadership, social and emotional learning, and more in addition to her work with 4-H clubs.