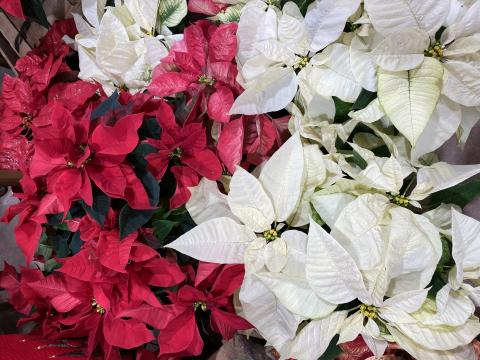 Red poinsettias are a traditional Christmas flower throughout much of the world. The poinsettia, Euphorbia pulcherrima, is a member of the Euphorbiaceae or spurge family.  This

colorful plant was discovered near the present-day city of Taxco, Mexico and the valleys surrounding Cuernavaca (in southern Mexico). While we know the plant as an indoor plant, in Mexico poinsettias grow to be large woody shrubs, often reaching 10 feet tall.

The ancient Aztec Indians of Mexico cultivated and regarded this plant as a symbol of purity before Christianity came to the western hemisphere. They called the plant cuetlaxochitl which  means “mortal flower that perishes and withers like all that is pure.”  (While the meaning is inspirational, aren’t we glad that we don’t have to say this name?)

The Aztecs found many uses for the plant. The cuetlaxochitl was a symbol of the new life earned by warriors who died in battle. They also used the plant’s red bracts to make a reddish-purple dye used in textiles and cosmetics. They crushed and applied the plant to skin infections, or placed plant parts on a person’s chest to stimulate circulation. The Aztecs made a medicine, to treat fevers, from the plant’s milky white sap, called latex. Today the Poinsettia is primarily an ornamental plant with little medicinal applications.

After the conquest, during the 17th century, Spanish Franciscan priests in Mexico began using the poinsettia in the Fiesta of Santa Pesebre, a nativity procession. They used the poinsettia because of its appropriate holiday color and blooming time.

Poinsettias were introduced to the United States by Joel Roberts Poinsett, the first appointed U.S. ambassador to Mexico. In 1825 while visiting Taxco he became enchanted with the red blooms and sent some plants to his home in Greenville, South Carolina. Poinsett, a skilled botanist, propagated the plants and began distributing the plants to friends and various botanical gardens. Within a few years, plants eventually reached Robert Buist, a nurseryman, who is believed to be the first person to sell the plant in the United States. In 1833, the plant was given the common name poinsettia, the name-sake of Joel Poinsett.

The poinsettia industry was pioneered and developed by the Ecke family. In the 1920’s, Albert and Paul Ecke began field growing poinsettias in the Hollywood and Beverly Hills area. Today the Paul Ecke Ranch located in Encinitas, California is the major producer of poinsettia mother plants used for cuttings by commercial growers.

Today, no holiday scene would be complete without a poinsettia. The modern poinsettia only slightly resembles the tall, leggy, red plant that grew wild throughout Central America.

The poinsettia we see today comes from many years of breeding and engineering. During the mid-1950’s plant breeding research began and has led to many the current improved varieties and cultivars. Today’s poinsettia is a free-branching hybrid plant with larger, longer lasting bracts. Hybridizing has resulted in colors including: cream, yellow, peach, pink, salmon, and marbled. Red poinsettias still account for more than 70 percent of sales.