All in the planning: State policies working to fix Gulf nutrient pollution

URBANA, Ill. – Tackling nutrient pollution in the Gulf of Mexico is a big job, requiring coordination between dozens of states whose waters flow into the Mississippi. Although a 2011 U.S. Environmental Protection Agency memo set a framework for each state to reduce its nutrient load, it was up to the states to set their own policies in motion. 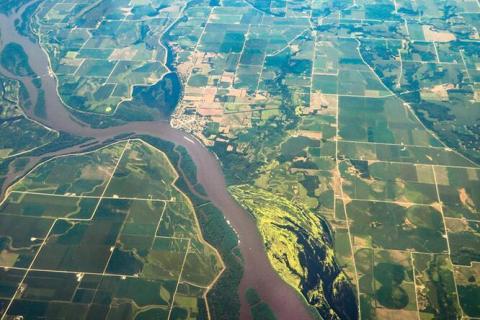 More than a decade on, critics have questioned the effectiveness of state nutrient reduction strategies, noting the still-massive hypoxic dead zones in the Gulf. In a new University of Illinois-led study, social scientists looked at the process states took to develop and implement their strategies, identifying key strengths and challenges that can inform other large-scale cooperative efforts.

“States really took advantage of the policy window opened by the EPA memo and its directive to create nutrient reduction strategies at the state level. After 2011, when groups started meeting, there was a lot of energy across the region to bring people together and try to come up with innovative new solutions. Ten years later, that energy is more dispersed. So, utilizing that policy window is a key lesson for other multi-state planning processes,” says Chloe Wardropper, assistant professor of natural resource policy in the Department of Natural Resources and Environmental Sciences at U of I and lead author on the study.

In our state, University of Illinois Extension has been working with the Illinois Environmental Protection Agency and Illinois Department of Agriculture on the Illinois Nutrient Loss Strategy since nearly the beginning of the effort. Accomplishments have included coordinating the development of the partner-written strategy document published in 2015 and three subsequent biennial reports.

Extension staff also work with these agencies to facilitate the multi-stakeholder Policy Working Group and its five subgroups. Stakeholder representatives include federal and state agencies, agricultural organizations, wastewater treatment agencies, non-governmental organizations, and industries. These meetings have helped provide a shared vision and create opportunities for groups that don’t usually have conversations.

As the study states, “…one agricultural stakeholder noted in Illinois: “We feel like that’s a huge thing — that folks like the Sierra Club are aware of what we’re doing, we invite them to our field days, we have discussions of what we think the science is saying, and I feel like we’re all learning a little bit more about the perspectives even between agriculture and environmental communities.”

Read more from the College of ACES