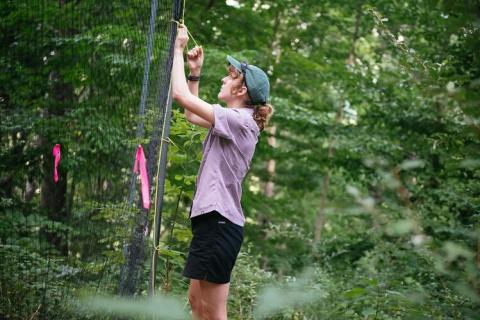 URBANA, Ill. – Bats help keep forests growing. Without bats to hold their populations in check, insects that munch on tree seedlings go wild, doing three to nine times more damage than when bats are on the scene. That’s according to a groundbreaking new study from the University of Illinois.

“A lot of folks associate bats with caves. But as it turns out, the habitat you could really associate with almost every bat species in North America is forest. And this is true globally. Forests are just really important to bats,” says Joy O’Keefe, study co-author and assistant professor and wildlife extension specialist in the Department of Natural Resources and Environmental Sciences at Illinois. “We wanted to ask the question: Are bats important to forests? And in this study, we've demonstrated they are.”

Other researchers have demonstrated bats’ insect-control services in crop fields and tropical forest systems, but no one has shown their benefits in temperate forests until now.

“It's especially important for us to learn how bats affect forests, given that bats are declining due to diseases like white-nose syndrome or collisions with wind turbines. This type of work can reveal the long-term consequences of bat declines,” says Elizabeth Beilke, postdoctoral researcher and lead author on the study.

While insect pressure was intense in plots without bat predation, the seedlings didn’t succumb to their injuries. But the researchers say long-term bat declines could prove fatal for the baby trees.

Read more from the College of ACES