Know what's true and what's not about tornadoes 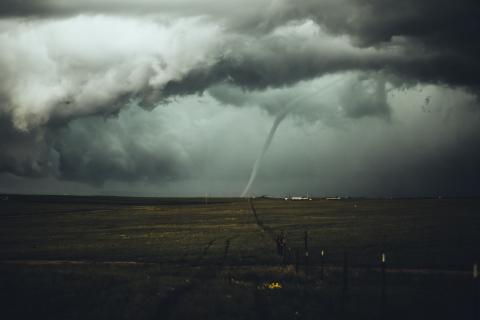 MYTH: Opening all the windows in a house will equalize the pressure during a tornado.
"This just wastes valuable time and won't keep a tornado from ripping off a roof or throwing debris into a home."

MYTH: Living near a river protect a home from damage.
"Many tornadoes have crossed rivers and caused widespread damage. The Nachez, Miss. tornado of 1840 tracked directly down the Mississippi River, killing hundreds. Other tornadoes have crossed large rivers without losing speed, devastating cities thought immune to tornadoes, such as the St. Louis Cyclone of 1896 that jumped the Mississippi River."

MYTH: Hiding under a freeway overpass will protect someone from a tornado.
"While the concrete and rebar in a bridge may offer some protection against flying debris, the overpass also acts as a wind tunnel and may actually serve to collect debris. Abandoning a vehicle at an overpass and climbing up the sides creates two hazards: parked vehicles may become mangled and wedged under the overpass blocking emergency vehicles; and climbing higher puts a person at greater risk of being hit by debris. Wind speeds under an overpass may exceed 300 mph."

MYTH: Securing yourself to a well pipe will keep a person form being sucked into a tornado.
"Though a tornado won't likely dislodge a buried pipe, the rope tied to a person will, instead, act like a 'tetherball and cheese slicer.' Lighter winds will likely cause you to be whipped around at the end of the rope, banging against anything within the radius of the rope. Stronger winds inside the tornado are likely to pull your body from the rope."

MYTH: There is no danger from a tornado not aimed directly at a person.
"Tornadoes act erratically, often changing directions quickly. Sturdy shelter is the only safe place to be during a tornado."

FACT: Tornadoes have picked people and items up, carried them some distance, and set them down without injury or damage.
"People and animals have been transported up to a quarter mile or more without serious injury. Fragile items, such as sets of fine china and glass have been blown from houses and recovered, miles away, without any damage. However, given the quantity of airborne debris, these occurrences are the exception, rather than the norm."

One may visit the National Weather Service tornado safety page for more information.