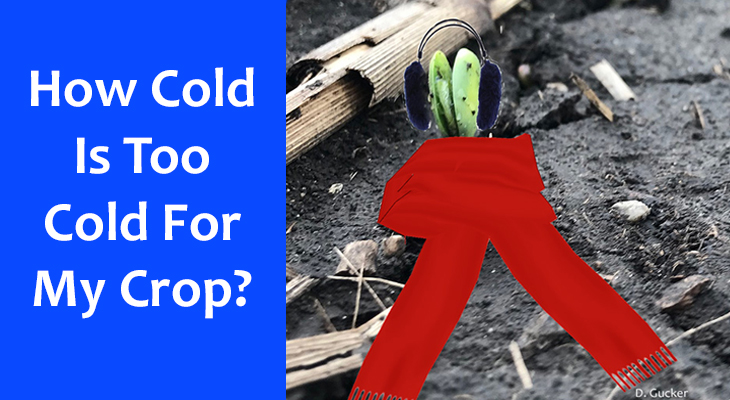 Posted by
Douglas B. Gucker

A recent article by Mike Stanton, soybean Extension educator at Michigan State University, does a nice job of discussing the possible effects of sub-freezing temperatures on early-planted soybeans. If the soybeans have not emerged, there will be not be damage from these low temperatures since the growing point is still below ground.

Research and observations from Purdue, Michigan State, Nebraska and North Dakota universities have all pointed out that soybean in the VE and VC growth stage will be unharmed at temperatures down to 30 deg. F even though their growing point is above ground. If the sub-freezing temperatures are preceded by several days of cool temperatures that hardened off the plant, then these same soybeans can withstand temperatures down to 28 deg. F for a period. The most sensitive time for emerging soybeans is at the “crook” stage when the hypocotyl is exposed and the cotyledons have not emerged.

A good source of images showing freeze damage to corn and soybeans is the Purdue University article, “Symptoms of Low Temperature Injury to Corn and Soybean”.

Wheat is most susceptible to frost damage from the late boot through dough stage. In the heading and flowering stage, frost damage can be expected at temperatures near 30 deg. F. “Assessing Wheat Freeze Damage 2015” from the University of Nebraska does a good job of explaining this and has photos of frost injury.

Fruit trees are most susceptible to sub-freezing temperatures when they are in the pre- to early bloom thorough post bloom with temperatures in the 28 deg. F range resulting in a fruit loss of 10% or more.  Mark Longstroth, MSU Extension Educator, has developed a very convenient “Picture Table of Fruit Tree Freeze Damage Thresholds”.

Warm season vegetables will be harmed by temperatures of 33 deg. F. Peppers are killed at the freezing point. Even if the plants are not killed by a freezing temperature, those temperatures can result in a plant that is stunted and performs poorly for the rest of the season.