How do volcanic eruptions affect climate? 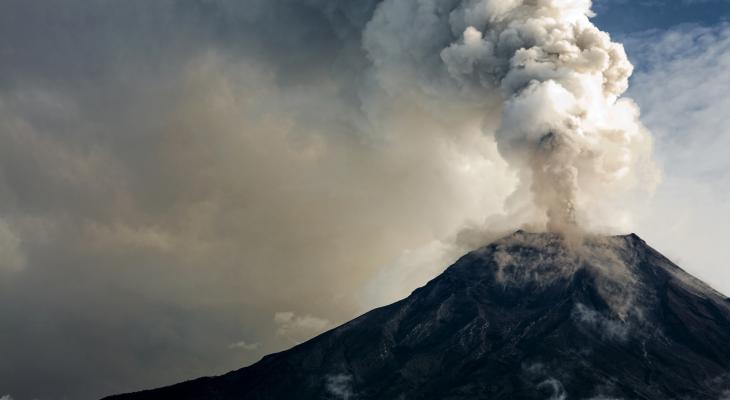 A large underwater volcano recently erupted in the South Pacific. Volcanoes can send huge amounts of gases and ash into the atmosphere. Very large eruptions can affect the climate.

In 1815, one of the most powerful volcanic eruptions in the last several thousand years occurred in the South Pacific. The following year was known as the Year without a Summer in the fledgling nation of the United States. Snow events occurred on the east coast in mid-summer. Western Europe had a very cold summer as well.

These types of volcanic eruptions typically will cool the earth for a few years, but it may not be why you think.

When an eruption occurs, the stuff that comes out may include ash, larger pieces of rock, and gases.

Ash is made up of extremely small rock particles - it is not dust. Even if this gets pushed high into the atmosphere, gravity usually brings it down within a few days, so that is not the culprit for the earth's cooling.

Larger pieces of rock come down immediately. There may be some heating of the atmosphere in the near vicinity as the rock screams down, but this is short-lived.

The main cause of cooling is from the gases. Huge amounts of sulfur dioxide can be emitted by a volcano that may be pushed up to 50,000 feet or more above the surface of the earth. At this elevation, the gases may linger for several years, mixing with water to become sulfuric acid. Sulfuric acid creates thin white clouds that reflect a lot of sunlight back to space, so this is what cools the earth. Those clouds also absorb heat trying to escape from earth, with the result being the atmosphere near the earth gets cooler while the higher atmosphere gets warmer. The bottom line is the earth's weather system gets totally messed up.

When Tambora erupted in 1815, it released an estimated 60 million to 80 million tons of sulfur dioxide into the high atmosphere in a short period of time. While there is always some sulfur dioxide in the atmosphere and sulfur cycles through the atmosphere, it takes some time to clear that much out. Hence the 1816 year without a summer. The following year, 1817, was also colder than normal in the northern hemisphere.

What about more recent volcanoes?

We have been very lucky over the last 200 years. There have not been any eruptions near the size of Tambora, although the Krakatoa (also in the South Pacific) eruption in 1883 was powerful and did cause cooling. The relatively recent ones you may have heard of, such as Pinatubo and Mt. St. Helens, were not nearly as large. Pinatubo did cause some slight cooling the year after it erupted, but it did not cause major crop failures.

Though many people know the earth is warming, they question whether it's being done by humans or nature.  Volcanoes do add some carbon dioxide to the atmosphere, but statistics from the U.S. Geological Survey clearly show the cause of warming.

Published scientific estimates of the global CO2 emission rate for all degassing subaerial (on land) and submarine volcanoes lie in a range from 0.13 gigaton to 0.44 gigaton per year. The approximate 35-gigaton anthropogenic  (from human activities) CO2 emission for 2010 is about 80 to 270 times larger than the respective maximum and minimum annual global volcanic CO2 emission estimates.

Anything else we should know?

We could also talk about the heavy precipitation that occurs after a large eruption caused from all the particulates in the air and the more acidic precipitation created due to the sulfuric acid in the air, but we’ll save that for another time.

The main takeaway is that volcanoes cause short-term cooling and are not the cause of global warming.

MEET THE AUTHOR: Duane Friend is an energy and environmental stewardship educator with University of Illinois Extension, serving the organization in many roles since 1993. Duane provides information and educational programs to adult and youth audiences in the areas of soil quality, weather and climate, energy conservation, and disaster preparedness. These programs provide practical solutions for families, farms, and communities.  He assists families in creating a household emergency plan, farmers with the implementation of soil management and conservation practices, and local government officials and business owners with energy conservation techniques.