Ozone, protector of life on earth 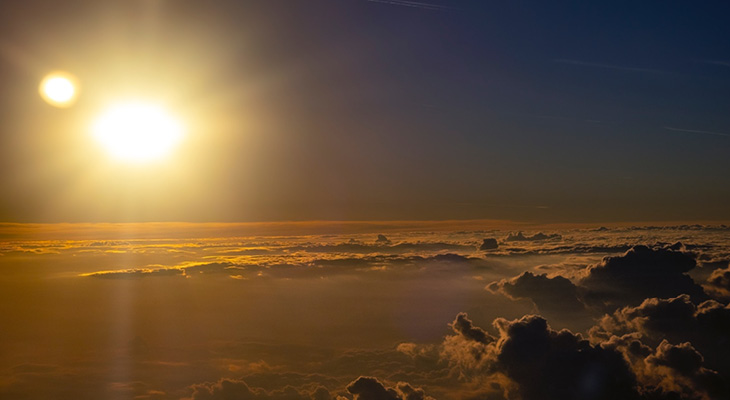 Earth’s atmosphere, while it appears to go forever, is actually a very thin layer of air. Technically the atmosphere reaches out for thousands of miles, but over half of the atmosphere is within 4 miles of the earth’s surface. Think about driving 4 miles- it’s not very far. By the time you’re 16 miles up, 98 percent of the atmosphere is below you. Again, not a big distance. At the upper end of this lies a concentration of a gas that protects life on earth. Without this gas, very little life would be able to survive.  This gas is called ozone. It works to prevent nastier portions of solar radiation called ultraviolet radiation from getting to the earth’s surface.

What is ultraviolet radiation?

First of all, radiation is just a form of energy movement. It’s not just given off with atomic bombs. Everything gives off radiation. Everything. Tables radiate. Ice cubes radiate. Liquid oxygen (around -300 degrees Fahrenheit) radiates.

Energy is radiated in the form of waves. The hotter the object, the shorter and more powerful the wavelengths are. Since the sun is the hottest object in the solar system, it radiates energy in very short wavelengths. The majority of these wavelengths are measured in billionths of a meter, or nanometers. Scientists have grouped ranges of wavelengths and given them names such as gamma rays and X-rays. Luckily, gamma rays and X-rays don’t make it to the earth’s surface. The shortest wavelengths of radiation that reach the earth’s surface are in the range that is called ultraviolet energy.

These are still very short and powerful forms of energy. Ultraviolet (UV) wavelengths run from 200 to 400 billionths of a meter. For reference, the average thickness of human hair is around 100 millionths of a meter, around a thousand times greater.

What do you relate UV energy to? Probably suntans and burns. That’s because UV energy can penetrate into the skin, and chronic or acute exposure can damage the skin and potentially cause skin cancer.

Two big things to know are that all UV radiation is invisible to humans, and almost all UV-C and UV-B  parts of UV radiation don’t make it to the earth’s surface. All because of a gas that forms naturally about 10 to 25 miles above the earth, called ozone.

We humans need oxygen to breathe, in the form of two atoms of oxygen together or O2. Ozone is when there is a third oxygen atom involved to make O3. Very little ozone is present at the earth’s surface unless you’re in a large metropolitan area during summer rush hour, a topic for another post. Most natural ozone is at a 10-to-25-mile altitude.

What does ozone have to do with UV radiation?

Although it’s a little more complicated than this, here is the basic explanation. As UV radiation gets into the earth’s atmosphere where ozone is concentrated, the UV-C and UV-B rays will interact with ozone, splitting some O3 molecules into O2 and a single atom of oxygen. That single atom of oxygen will then attach to something else like other single atoms of oxygen to form O2 or combine with O2 to reform ozone. One result of this interaction is UV-C and most UV-B radiation is prevented from reaching the earth’s surface. Another result is heat is released into that part of the atmosphere, which is a benefit to our weather. One more topic for another blog.

If there were no ozone in our upper atmosphere, there would not be much life on earth, at least where sunlight was present. We live on an amazing sphere that has many things working to protect us - if we don’t mess those things up.

Learn how different types of ozone affect our health