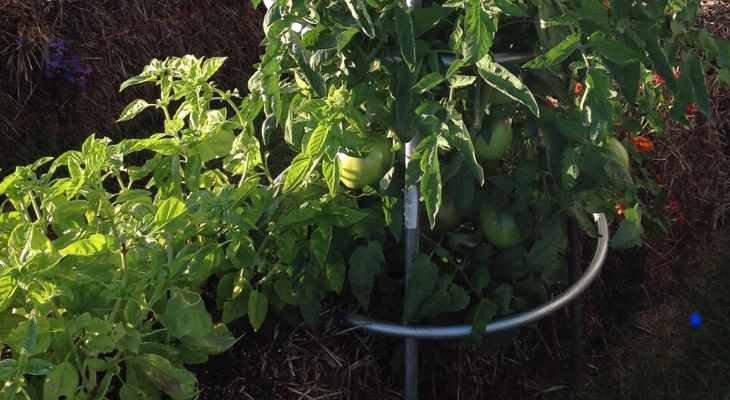 Tomato plants are warm-season vegetables that should be planted after the danger of frost. For our area that means early to mid-May. Hopefully no one planted theirs before last weekend’s cold snap! Here are some steps to remember when growing your newly planted crop.

1. The first question you should ask is “Are these determinate or indeterminate plants?” Each has different requirements.

Determinate (bush) varieties produce fruit on their growing tips, stopping production once the fruit has set. They are most often used for container gardening or small spaces, and generally do not need to be trellised. Popular examples are Roma, the Mountain series, and Cherry Gold.

Indeterminate plants produce fruit on side branches, and are able to produce fruit all summer and fall, until they are killed by frost. They can grow six to 12 feet tall and require trellising. They generally taste better than determinate tomatoes because of the foliage-to-fruit ratio. Some of the most popular heirloom varieties are indeterminate types like Brandywine, Cherokee Purple, and Sweet 100.

3. Prune branches that do not produce fruit, and suckers at the base of the plant. Some gardeners prune to have only one leader and one lateral (side) branch from each node.

4. Gardeners must make trellising plans shortly after planting. Trellising a half-grown tomato is impossible to do without damaging the plant.

Trellising keeps the foliage and fruits off the ground and increases air flow, reducing foliar diseases. An upright plant also makes it easier to spot problems. There is nothing more disappointing than a gorgeous tomato eaten up by pests or rotting because it has been lying on the ground. Basic tomato cages found at any big box store or garden center are the simplest, most popular, and most affordable method of trellising. But you must buy the largest, sturdiest model that you can find, and anchor it with a t-post. Otherwise, they will topple over once the plant grows large. Smaller and thinner-gauge versions may be effective with smaller determinate varieties, but insufficient for indeterminate tomatoes.

We’ve previously experimented with making wire cages with six-inch wire mesh sheep fencing or the Florida weave method, but find the process more expensive, cumbersome, and painful than we like to recommend for home gardeners. But we can give you some pointers if you’re looking to upgrade your trellising system.

5. Stagger plants when growing multiple tomatoes. Plant half your tomatoes in May and a few more two to three weeks later to have multiple harvest dates throughout the season. This way you can plant your favorite variety again in the middle of June and have a second peak of tomatoes in the fall. Second planting should utilize early varieties to ensure a harvest before frost.

6. Fertilize with liquid feed two weeks after planting, again when they fruit and every four weeks after that.

7.  Harvest tomatoes when they are firm and mostly ripened.