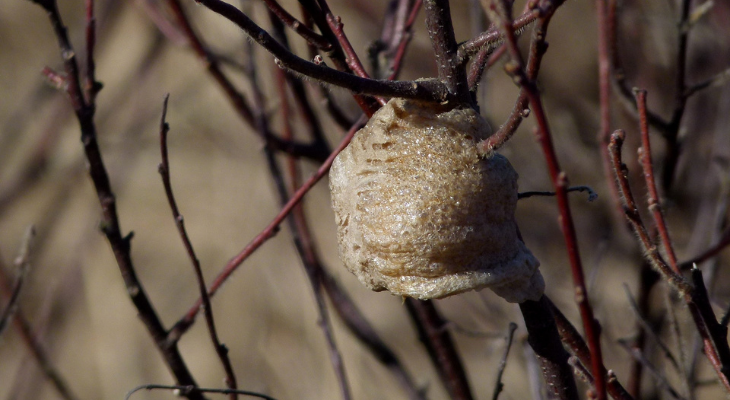 You have likely spied upon, or even befriended, praying mantises in your garden this growing season. Although most adults die out during the late fall and early winter, they likely left behind a foamy garden ornament in your landscape.

Alien-looking mantises all have a pair of fierce grasping legs that allow them to catch their prey, long legs that allow them to lunge, and a triangular head that twists 180 degrees around so they may see all around them. The praying mantis is the only insect that can look over its shoulder. They wait motionless and use camouflage to help them catch unsuspecting insects. Some tropical species can mimic a beautiful orchid flower, leaves, or twigs. They can actually change their color to match their surroundings over a period of days.

The two most common species found in Central Illinois are the Chinese mantis (Tenodera aridifolia sinensis) and the Carolina mantis (Stagmomantis carolina).

Chinese mantises are larger than the Carolina mantis, growing up to 5 inches in length. They are normally tan to pale brown, with some green or yellow striping.

Carolina mantises come in a variety of colors (green, grey, and brown) and patterns, growing up to 2½ inches.

The adult female Chinese mantis will lay her massive egg case, known as an ootheca, on twigs, stems, rocks, or even the sides of buildings or fence posts. For her, the location requires only that it will hold her body weight and is somewhat vertical, making your brick siding ideal.

After laying, the ootheca quickly hardens in preparation for a winter slumber, and the mother will die shortly after. These egg cases, which we tend to find in fall and winter, are light brown, about 1.5 inches wide and look like foam insulation. Within each foam-like ootheca are dozens or hundreds mantis eggs that can survive the perils of winter because of their foamy insulation.

If they must be removed from a wall, transfer them to a sheltered place. Never put an egg case on the ground; the eggs inside will be consumed by ants.

Nymphs will emerge next spring, erupting to start their journey to find insects, which may include their brothers and sisters. Most of the mantises that hatch from an egg case will die from starvation or cannibalism. They are territorial and by the end of the summer, usually, only one adult remains.