How non-native teasel went from good to absolutely bad 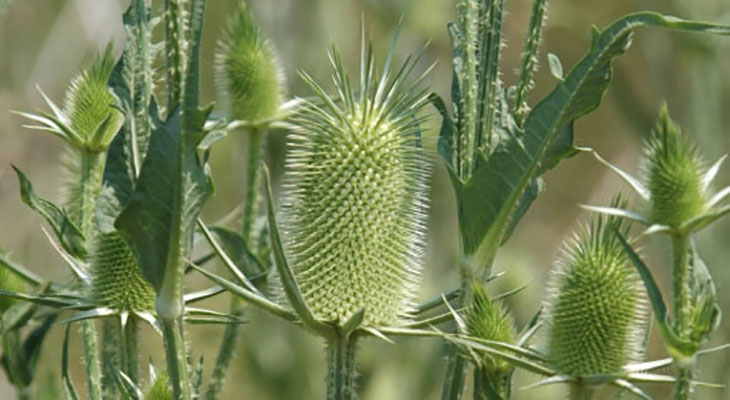 Chances are if you have driven along any country road in Illinois, you have seen a tall plant with a spiky silvery thistle-like flower head swaying in the wind. What you may not know is that this plant hides a sinister side. Cutleaf teasel (Dipsacus laciniatus) and its relative the Common teasel (Dipsacus fullonum) are prairie “bullies” and have been slowly taking over our high-quality agricultural landscapes.

They didn’t start off bad

Native to Europe and temperate Asia, cutleaf teasel was cultivated for both its’ industrial use as well as ornamental use. Since the Middle Ages, Europeans used the dried seed heads to raise the nap on woolen cloth and they brought that practice and the plant with them to North America in the early 18th-century. Teasing wool produces a soft, almost furry texture. The covering on a pool table (called baize) is one example of teased wool. Cashmere also uses this technique to produce its’ super soft feel and drape.

Farmers, at one time, planted fields of teasel and while they had to tend their crop for two years before they flowered, they could expect a yield of 50,000 to 150,000 heads per acre. Since wool manufacturers needed replacement heads regularly, this could be a profitable crop for the farmer.

Teasels were also used in dried floral arrangements. This use may explain why common teasel is often found in and around cemeteries.

How they went bad

This short video from the University of Wisconsin, Madison will help you identify teasel. As noted above, mowing is not an effective method of removal, as plants can still flower after repeated mowing.

Consult this University of Illinois Extension guide for chemical options.

ABOUT THE AUTHOR: Wendy Ferguson coordinates the Master Gardener and Master Naturalist programs in Henderson, Knox, McDonough, and Warren Counties. Wendy earned a BS in Environmental Studies from Eureka College and an MS in Environmental Studies with an emphasis on writing and communication from Green Mountain College. She is interested in facilitating a deeper connection to place for community members through nature journaling and education. She is also an author for the Naturalist Notebook and Naturalist News blogs.