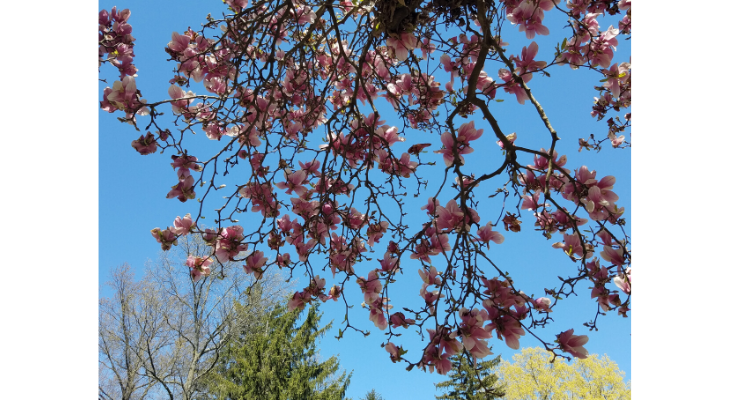 Although spring was late coming this year, it has finally sprung, and with it both star magnolia (Magnolia stellata) and saucer magnolia (Magnolia x soulangeana) are in bloom. These beautiful ornamental trees, native to Asia, provide about a month of spectacular flowers each spring. They are some of the first landscape plants in our area to deliver such a showy display; truly one of the most endorsing signs that spring is finally here.

While magnolias are not the very first trees in spring to flower in our area, some natives are earlier, they are certainly the showiest. It is interesting to consider why they produce such an elaborate flowering display when other trees, like maples and oaks, quietly flower each spring with so much less fanfare. Much of this difference in flowering display relates to strategies for pollination.

Most of our native, deciduous trees are primarily wind-pollinated. Their strategy is to produce copious amounts of pollen in the hopes that wind dispersion will spread their genes far and wide. Many of these tree species are the culprits behind seasonal allergies since they do release large quantities of pollen. Wind pollinated species do not need a showy display to attract pollinating animals. They typically lack aroma and nectar, which, along with color, are the primary means other plants attract pollinators to their flowers.

Since most of our native trees, like oak, ash, and maple, evolved flowers for wind pollination, they are largely unnoticed during flowering. Their smaller, low-key flowers are not designed to be colorful or attractive, but rather to allow tons of pollen to freely float away on the wind. Their pollen-producing structures, called anthers, are often loosely attached and hang down to dangle in the wind.

Magnolias evolved a different strategy for pollination. Their flowers are quite showy, produce nectar, and have fragrance, all in the effort to attract insects.  They invest more energy in these insect-attracting traits than pollen production, generating much less pollen per flower than their wind-pollinated cousins.

The interesting twist with magnolias is that their genus (Magnolia) is quite ancient, evolving very early in the plant family tree, earlier than our native flowering trees. They are considered to be among the oldest of the flowering plants. At the time of their evolution, many common pollinators we think of today, such as bees, butterflies, and moths had not evolved yet.  As a result, magnolias developed flowers for pollination by beetles and flies, which were the primary insect pollinators 100 million years ago.

Magnolia flowers are relatively simple when compared to other, more specialized flowers. Pollen structures are arranged so that insects searching for a nectar reward will haphazardly bump into them and subsequently spread pollen as they amble from flower to flower.

Flightless beetles were the primary constituents of magnolia flowers millions of years ago as they evolved and are often considered “dumb pollinators”.  These poor insects get a bad rap because they cannot perform more advanced behaviors of butterflies and other pollinators that evolved later along the insect family tree.  Butterflies and other “smarter” pollinators are able to perform advanced tasks such as extraordinary feats of flower manipulation to harvest pollen, and many have an amazing memory for flower identification.

The lowly beetle is left to dumbly wander from flower to flower, although this insect receives a ton of credit in the early development of magnolia flowers.  The process of co-evolution between flowering plants and insects is considered one of the most intricate multi-species evolutionary processes on earth.  When plants evolved flowers, it was a game-changer for plant reproduction.  So, there is no reason to totally discount beetles as “dumb” since magnolia flowers would not be possible without these grunts of the pollinator world.

Consequently, magnolias evolved to accommodate their “less educated” pollinators with some specially tailored adaptations.  Beetle mouthparts are made primary for chewing, not pollen collection from delicate flower parts.  Thus, other plant parts are often consumed in the process of harvesting pollen or nectar from the flowers.  Magnolia flowers have leathery, thick leaves along with seeds that are well protected to handle this kind of sloppiness.

Magnolias and their beetle friends are certainly an odd couple in the plant and insect world.  However, their relationship has worked out wonderfully to produce some of our most exquisite flowering ornamental trees.