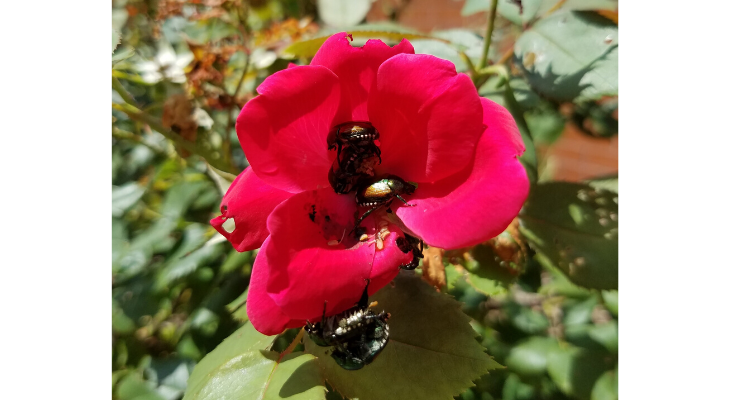 Last week, I notice the first of an annual pest in our area that is always unwelcome to anyone that gardens.  Japanese beetle (Popillia japonica) adults emerge from the ground every June to voraciously consume a plethora of plants.  Although there are certainly plants these beetles prefer, their list of potential host plants is quite large (greater than 100 species) including everything from large landscape plants to home vegetable gardens.  As these small, metallic beetles buzz about each year, they are most known to feed on foliage, although they often consume flowers, fruits and other plant parts in their approximately 6 week feeding frenzy.

As you may have noticed in years past, once these beetles take a liking to a particular plant they invite their buddies and, before long, your plant is overrun with multitudes of the little guys, while other plants in close proximity attract little or no beetles at all.  For me, it has always been fascinating to observe this phenomena.  Why do they so voraciously consume my roses while completely ignoring the healthy viburnum that is immediately adjacent?

Simply put, the answer is scent.  These beetles, like many other insects, are strongly attracted to particular plant scents, making certain plants just irresistible to the hungry beetles.  This begins the cycle of attraction to a particular plant, but the more they feed on an individual plant, the more attractive that plant becomes to other beetles.  A plant that is already damaged from feeding may release scent in reaction to the feeding activity, which attracts more beetles.  In addition, beetles release a sex pheromone to attract others, which is perhaps their strongest preference for a particular scent.  Therefore, as beetles visit and feed upon a plant, it becomes more and more attractive to other beetles.

The primary symptom of Japanese beetle feeding is skeletonized leaves, created as the beetles feed on the soft leaf tissue between veins.  This type of damage is rarely fatal since the plant is able to leaf out and produce energy it needs from the leaves earlier in the season, prior to feeding.  Additionally, it is rare for every leaf to be consumed on a particular plant, leaving some leaf area for continuing energy production.  Feeding damage is considered to be mostly aesthetic and in many cases, such as large shade trees, does not warrant control due to the overwhelming numbers of Japanese beetles and the size of the plant.

I only recommend control of these pests in cases where it is a prized landscape plant, like that rose right by your front door, or an annual vegetable that may not produce a good crop without control.  In most cases, I use enclosures such as floating row cover to keep beetles off.  Remember, we are only stuck with these little guys until about mid-August when the row cover can be removed.

Since relative attraction increases with beetle presence on a particular plant or crop, early scouting in June and immediate control is another effective strategy.  If you can remove or kill the beetles before they have time to damage your plant and release pheromones, you can limit attraction of future beetles.

For this proactive approach on control, I recommend mechanical removal of the beetles at first sight.  Conveniently, primarily feeding hours for Japanese beetles are 9am-3pm in full sun locations, making them easy to identify.  Their defense mechanism when disturbed is to drop to the ground which can be exploited if you just bump a branch.  Place a bowl of soapy water or alcohol below the branch to catch and kill the beetles and you can easily remove them all in a few minutes.  Since they won’t be sticking around in large numbers and adding to the attractive scents, your plant will draw fewer beetles throughout summer.  The most important part of this plan is to get out early and remove them almost daily for the first few weeks of emergence.

There are multitudes of pesticides labeled for Japanese beetle control, which are effective as well.  However, they typically require reapplication every 1-2 weeks.  In addition, these chemicals are not selective and have negative impacts to beneficial insects.  To me, the drawbacks outweigh the benefits.

Controlling the overwhelming number of these gluttonous critters can be tricky. Regardless of the control method you select, early detection and prompt follow-up are essential before your plants just start to smell too irresistible.