The history of blueberries: From Native American staple to domesticated superfood 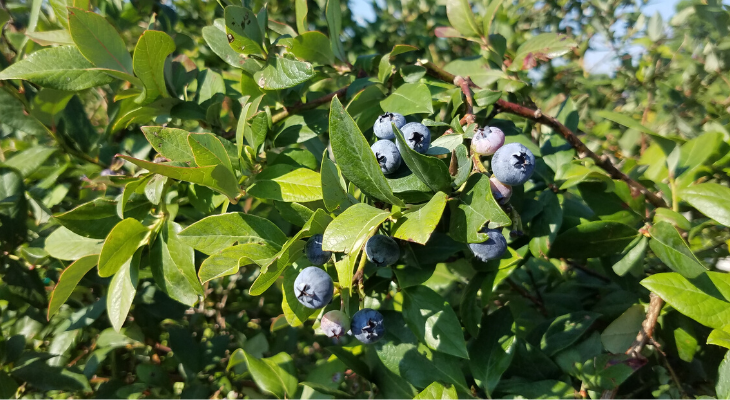 It’s hard to imagine a foodscape without blueberries. My family grows them, picks them, eats them fresh, and freezes a good supply for the rest of the year. Throughout winter, we regularly eat them in smoothies, pancakes, and other baked goods. The fruits freeze well and keep for months in our deep freezer.

Prior to the early 20th century, blueberries were not the staple fruit we think of today, as they have only been in cultivation for about the last 100 years or so. Although they appeared in U.S. markets, harvested from the wild, their distribution was limited.  Compare that to another staple fruit, the apple, which has been cultivated for thousands of years.  Apples, however, do have one advantage.  Their parent species, Malus sieversii, originated in central Asia where there is a long history of permanent human settlement, with the first humans arriving some 100,000 years ago.

Blueberries are native to our very own continent of North America, which humans first inhabited much later (15,000 years ago) based on the most widely accepted theories, although some recent research suggests much earlier human inhabitants on our continent.

Blueberries are members of the genus Vaccinium, which hosts more than 35 species native to North America. Worldwide the Vaccinium genome is diverse, with species adapted to a wide range of climates. On our continent, the Vaccinium species represent similar diversity as we have species adapted to warmer climates, such as southern Mexico, with northern species distributed throughout Canada and Alaska. Here in the Midwest, most cultivated varieties of blueberry come from the southern highbush blueberry (Vaccinium corymbosum), which is native to eastern and southern US (Zones 5-8), as well as eastern Canada.

Although the first cultivated crop of blueberries was not successfully grown until 1912, they were an important source of food for Native Americans for thousands of years prior. Blueberries keep longer in storage than many other similar berries, making them an important forage crop that Native Americans dried and stored for winter. They were eaten fresh when in season and incorporated into a variety of basic stews and other food combinations. In addition, Native American use of Vaccinium species for medical purposes was widespread, including the use of roots, stems, leaves, flowers, and fruits in various preparations.

In many ways, Native Americans directly influenced the development of modern blueberry varieties by passing on knowledge about edible use of the berries, growth habit and the occurrence of blueberry shrubs, and other information to European immigrants.

The story of how modern commercial blueberry cultivation came to be starts with the daughter of a New Jersey cranberry farmer. As early as the late 1890s, Elizabeth White was interested in the blueberry’s potential as a cultivated crop. However, most other growers at the time did not believe they could be domesticated. There was simply a lack of understanding of the basic needs of blueberries.

Interestingly, Coville had already made history in the world of U.S. botany as a field botanist on the first comprehensive, multidisciplinary expedition to Death Valley in the early 1890s. He would later go on to become the chief botanist for USDA, publishing more than170 scientific papers and books in his lifetime.

In 1911, Coville published a book title, “Experiments in Blueberry Culture”, in which he documents his research and the work of others in the early 1900s focused on the cultivation of Vaccinium species in the U.S. Coville’s groundbreaking discovery was that blueberries require very acidic soil conditions, which was previously not understood.

Back on her cranberry farm in New Jersey, Elizabeth White read Colville’s 1911 book and immediately contacted him. She offered acreage on her farm for research and development, partnering with Coville to lay the groundwork for our modern blueberry varieties.

Another important milestone in the history of blueberries occurred in the 1990s and early 2000s when a body of research explored the health benefits of blueberries, identifying them as a “superfood.” This discovery really launched blueberry production in the U.S., increasing from around 100 million pounds a year in the late 1990s to over 500 million pounds in recent years.

The next time you enjoy these little blue superfoods, consider their interesting history on our continent and give a little thanks to the early innovation of indigenous people and later horticulturists who made it all possible. They would not be commonplace on our grocery store shelves without them.