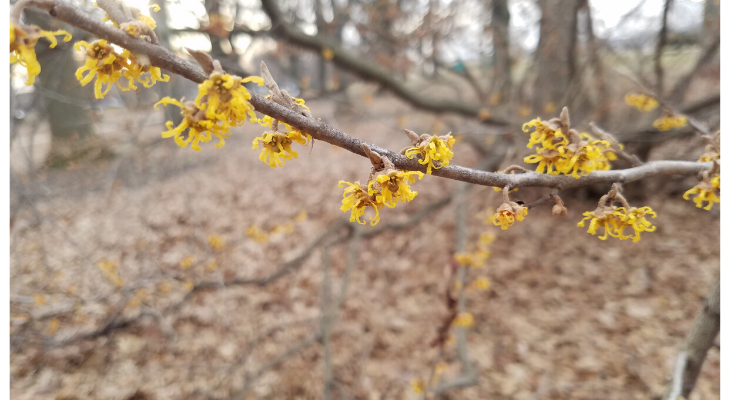 The late winter is often a time of anticipation for spring flowering, when many gardeners watch for the first signs of early blooming bulbs.  However, one unique woody plant is currently in full bloom putting on the first flower display of spring in the Illinois landscape.

Witch hazel is the common name associated with a handful of species in the genus Hamamelis which flower very late in the fall or very early in the year, during late winter into spring.  They are also known to have excellent fall color, plus unique summer foliage and fruits, to provide four seasons of interest.

Right now, Chinese witch hazel (Hamamelis mollis) is in full bloom in our area putting on a wonderful and refreshing flower display for this time of year.  Last week I was out at the University of Illinois Arboretum and observed several specimens in full bloom with an entire canopy of feathery, bright yellow blooms that demand attention on a gray, cloudy winter day.

Over the next month or so this plant will bloom, with cold weather preserving its display.  As temperatures dip back down the flowers will contract in self-preservation to open back up on warmer days and beg for the attention of any opportune pollinators that may be out and about this early.

Witch hazels are insect pollinated plants, with showy, nectar producing flowers, which are often quite fragrant, to lure in the earliest (or latest) pollinators of the year.  Pollination is noted to be carried out primarily by flies and wasps, but also by some native species of winter-flying moths that have specially adapted thermoregulation, allowing them to be active throughout the coldest parts of the year.

A near native species, the vernal witch hazel (Hamamelis vernalis) is native to streambanks and wet woodland of the southern US, from parts of Texas and Florida north to Missouri, as well as most of the eastern US.  It blooms in late winter to early spring during a similar timeframe as Chinese witch hazel, with somewhat yellow-red blooms that are weather dependent, typically opening up in late February.  If springs weather stays cold, they are known to continue flowering as late as April in some years.

Common witch hazel (Hamamelis virginiana) is native to Illinois, known to occur in about two dozen counties across the state. Illinois lies at its western boundary, with most of its home range to the east making it relatively uncommon statewide, occurring in more abundance in northern counties.  It has been observed in several central Illinois counties including Champaign County and adjacent counties.

Common witch hazel flowers in the very late fall into winter, making it one of the last plants to flower in Illinois, usually in mid to late October.  The bright yellow and fragrant flowers coincide with attractive yellow fall color to create a wonderful ensemble of fall color.  Like other witch hazels, it is shade tolerant, growing in a range of light conditions from full sun to shade.  Flowering is enhanced with more sun exposure, but these shrubs do quite well under mature shade trees making them versatile landscape plants.

At maturity, witch hazels are spreading shrubs that do require some space, working best as a border or screening plants, in my opinion.   The vernal witch hazel does do better as a single specimen than others, making it my choice for a setting with less space.

Witch hazels are wonderful addition to most landscapes, adapted to a range of soil and light conditions.  Consider adding these attractive, four-season plants to your garden for their unique flowering display.  It is a great way to shake the winter blues with some rare color during dormant season.