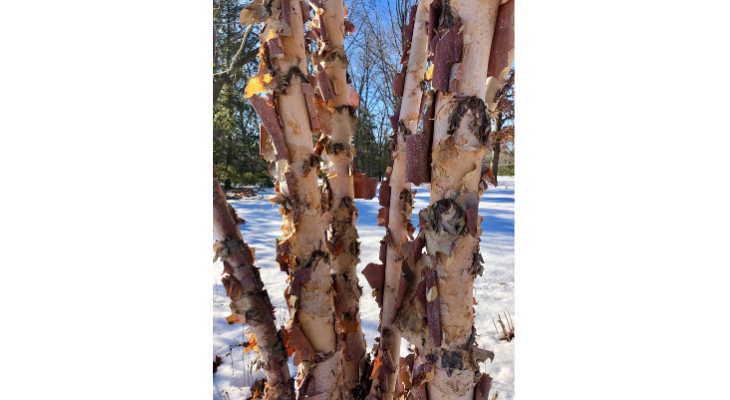 The snow-blanketed wintertime landscape often lacks the beauty we can recall from other times of the year when plants were in bloom or filled with wonderful green foliage.  It leaves both humans and wildlife searching for plant life that retains interest either in the form of ornamental beauty for us, or shelter and habitat for all the animals that share our landscape.

As gardeners, I think we all strive for plants with four seasons of ornamental attractiveness and often make compromises for one season of more less interest.  Perhaps off-season wildlife interest can help to fill void for some of these plants that just don’t quite fit the bill as four-season show stoppers?

River birch (Betula nigra) is one of those plants that really catches my eye in wintertime for its exceptional bark character.  In addition, it’s often multi-stemmed habit provides ample branch structure at eye level to host its magnificent, curling bark which exfoliates with a variety of color from creamy white to rusty orange, or even pale hues of brown.  Beyond its bark, it boasts an excellent fall color as well as a showy spring flower display, creating multiple seasons of beauty.

This native tree is a quite adaptable and fast-growing tree, with a home range that spans much of the eastern US.  It typically frequents streambanks, swamps and bottomlands associated with stream systems.  Similar to many other bottomland trees, river birch has a root system that is adaptable to soil conditions with low oxygen and poor drainage.  This adaptability is well suited to the urban environments since many sites have similar conditions due to soil compaction.

When someone asks me what I recommend for a fast growing shade tree, river birch is often one of my top recommendations, simply for its beautiful bark and excellent adaptability to most sites.  However, it does have one relative weakness since it cannot tolerate alkaline soils, or soils with a high pH, which occur occasionally in urban settings.

On these sites, river birch can develop an iron deficiency, commonly referred to as chlorosis, which impacts its health and appearance.  This condition can be identified by yellowing leaves which keep their green color along the veins.  It is a pretty distinctive pattern on leaves with a sharp contrast between yellow at outer leaf edges and inner areas of green at the viens.

Iron chlorosis is fairly easily treated by adding a soil acidifier to lower pH, but it is slow process to significantly change pH, often requiring several applications over several seasons.  Nonetheless, I still recommend river birch since sites with alkaline soils are typically in the minority and the condition can be corrected.  In addition, it is relatively insect pest and disease free, unlike some of the non-native birches, such as white birch (Betula papyrifera), that are commonly planted in Illinois and suffer from a range of ailments.

While river birch’s attractive bark could arguably provide 4 seasons of interest, to me its showiness seems to wane in the summer time with a full crown of leaves and other green plants surrounding it in the landscape.  Summer is probably the time it has the lease ornamental uniqueness to humans, but it may one of the greatest times of wildlife interest.

Since river birch is an Illinois native, it provides valuable habitat to a number of native insects that use this tree during the growing season for food and shelter.  It is an important food source for over 45 species of moths in Illinois, since their larval forms feed on river birch.  Several species of butterfly also use this tree in their larval form.  Over two dozen other types of insects, including wood boring beetles, leaf feeding insects, fly larva and others use river birch as well.

I think the insect life this tree supports in summertime far outweighs any loss in ornamental appeal.  However, when you consider other species of wildlife, it also supports 8 species of birds which feed on buds and seeds throughout the year.  It is a favorite nesting tree for squirrels and provides winter browse for white tailed deer.

All things considered, river birch is an excellent specimen for the landscape setting, with a high wildlife value and widespread availability in a variety of sizes at most nurseries and garden centers.