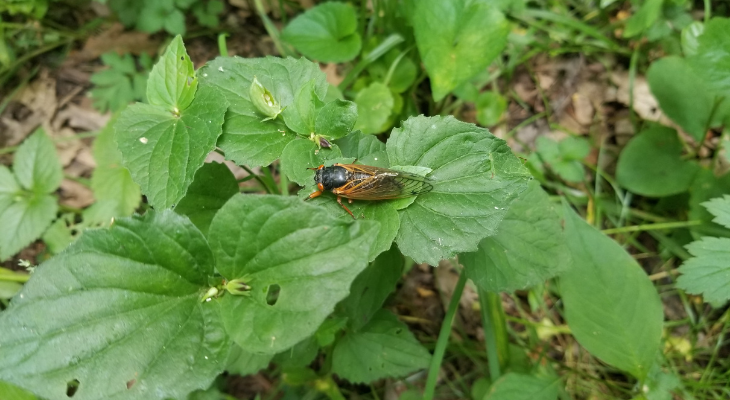 Over the next few weeks, some of central Illinois will experience a rare phenomenon that only occurs every other decade.  As soil temperatures warm, millions of insects will emerge from the ground in forests, city parks, yards and gardens.  They will carefully navigate the terrain and scale a close by, large object (such as a tree trunk) to shed their nymphal skin and enter the world as adult cicadas.

These cicadas are a part of what’s known as Brood X, which makes its appearance across Indiana, a tiny chunk of Illinois (Clark, Crawford, Edgar and Vermilion counties) and portions of 15 other eastern states once every 17 years.  They are one of many periodical cicada broods that emerge across the Eastern and Midwestern US at regular intervals of 13 or 17 years.  These incredible insects are some of the longest lived on the globe and only occur here in the United States.

You might be asking yourself, “What is a cicada brood”?  Well, the simple definition is that it is a group of cicadas that emerge on a common schedule across a geographic area.  However, when we look a little deeper, it becomes apparent that a single cicada brood is not comprised of just one species, but includes several.  All species of periodical cicada belong to the genus Magicicada and Brood X typically includes three species (M. cassini, M. septendecim, and M. septendecula) of 17-yearr cicada.

“It’s a natural wonder of the world to see insects emerge in these kind of numbers and the sheer biomass of these cicadas is incredible,” says Katie Dana, an entomologist with the Illinois Natural History Survey.  Dana studies periodical cicadas, as well as many other species of cicada that occur in Illinois and across the Midwest.

For most of their life, periodical cicadas are underground, quietly feeding on tree roots and molting at regular intervals.  While the first molt for these cicadas typically happens in their first year underground, subsequent molts gneraly occur on a 4-year schedule.  So, all periodical cicadas emerge either at 13 or 17yr intervals, based on the timing of these molts.

However, there are always those that break the mold and the “common schedule” of a particular brood can be confused by some individuals who, emerge 4 years early, or one molting earlier than the rest of their brood.

In 2017, there were some early emerging Brood X cicadas and Dana collected samples in western Indiana for later comparison.

“This year, I am going to be collecting cicadas at the same locations I found them in 2017,” says Dana.  “I plan to compare things like size and morphology and, hopefully, we’ll be doing some genetics work to see if the early emerging individuals may potentially be setting up a new brood.”

Setting up a new brood is no easy task as predators love the influx of these large and tasty insects.  If too few cicadas emerge early, they may be entirely consumed by predators before they can complete their lifecycle and perpetuate a new brood on a different 4-year schedule.

Once above ground, cicadas have a short interval to mate and lay eggs before they die.  Females lay their eggs in tree branch tips and tiny nymphs hatch in just a few weeks. They drop to the ground only to burrow down in search of tree roots they can feed upon for years to come.

What about Cicada Damage?

While some cicada damage may be observed in branch tips that die back after eggs are deposited, the damage is generally negligible.  Root feeding while underground is also considered insignificant, since it occurs over such a long timeframe.

They do have some favorite species to root-feed on, which are also their favorites for egg laying while above ground.  They prefer deciduous trees, such as oaks and maples, and are known to also lay eggs on many types of fruit tree.

While a few dead tips are no big deal to a mature oak, they can stress smaller, newly established trees.   The general recommendation is for gardeners to protect newly established shade trees or fruit trees with netting to exclude cicadas.  Larger, more mature trees should not have enough damage to warrant control.  To protect smaller trees, use a fine netting with holes smaller than ½ inch and be sure to wrap all parts of the tree.  Ensure the wrapping is secured at the trunk as cicadas are prone to crawl up trees after they emerge.

Pesticide applications are not recommended in any case since they are ineffective and cicada numbers are so large.  In addition, they are native insects that benefit both native flora and fauna. At the ecosystem level, cicada emergence is a huge boost as these insects release a burst of nutrients from the soil that they have collected over many years of feeding.

“Its free fertilizer for plants,” notes Dana, “and even though they have bright colors that suggests they might be poison, they’re not, and they actually make a really great meal for a lot of native wildlife.”

There are already reports of Brood X emergence in Indiana, so they should start to appear in their expected range in Illinois anytime, which only covers Clark, Crawford, Edgar and Vermilion counties.  From early May until about mid-June they will emerge and belt out their mating call which can be incredibly loud in areas of high cicada concentration.  This timing is much earlier than annual cicada species that emerge later in summer each year to sing their songs.

Dana and other researchers are really interested in exactly where and when these insects emerge across central Illinois since we are at the edge of their known range. If you are interested in reporting the timing and location of cicada emergence, please download the cicada safari phone app (available at cicadasarfari.org) to report your sightings.

If you observe Brood X cicadas in Illinois, outside of the four counties listed above, please contact Katie Dana directly at cdana2@illinois.edu or twitter.com/ONoKatyDidnt.  Her lab is interested in following up on any sightings outside the expected range and you can help contribute to this important research effort by reporting your findings.