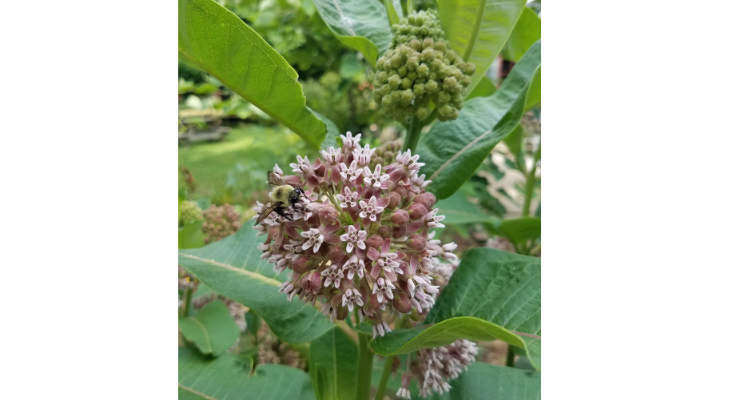 Many gardeners are starting to integrate more and more milkweed into their landscaping in support of monarch butterflies.  Plants in the milkweed genius (Asclepius) are the exclusive food source for monarch caterpillars, making them incredibly important in the race to sustain imperiled monarch populations across our continent.

Like so many other landscape plants, milkweeds are not free of pest and disease issues, which has spurred a real uptick in gardening questions related to the care of these milky-sapped, native plants.  Perhaps the most common milkweed pest question comes from concerned gardeners that have observed masses of tiny bright yellow insects feeding on their plants.  The obtrusive mob of sap sucking insects seems to appear overnight, multiplying at an astonishing rate.

Oleander aphids (Aphis nerii) make up the congregation that many gardeners in our area find on milkweeds each year.  They are a non-native pest that feeds on a wide range of plants in the dogbane family (Apocynaceae), including plants of the genera Asclepius and Vinca, as well as their namesake, oleander (Nerium oleander).  They occur nearly worldwide in temperate to tropical climates and are assumed to have originated in the Mediterranean, across the same home range as oleander.

Like many insects, some aspects of their lifecycle are right out of a science fiction movie.  Oleander aphids are known to be parthenogenetic, meaning they have the astonishing ability to reproduce asexually.  So, there are no male oleander aphids, only females that reproduce clones of themselves.  This allows these aphids to rapidly multiply, going from just a few to many thousands over a very short timeframe.  That’s why many gardeners don’t notice them until there is a hungry throng covering their plants.

As a defense mechanism, milkweeds contain cardenolide toxins that make the plants taste bad and can even kill feeding animals if ingested in high enough quantities.  Both monarch caterpillars and these aphids have developed an ability to process the toxins and concentrate them into their cells.  It is believed that the bright yellow coloration is a symbol of the toxicity and warns predators to heed caution.  So, expanding aphid colonies typically benefit from a lack of predatory insects.

However, it’s amazing how nature typically has a wide range of checks and balances.  Although aphid toxicity repels many predators, allowing aphid colonies to rapidly establish, there are some specialized predators that eventually find the unwitting prey.

Parasitic wasps lay a single egg inside of rapidly growing aphid nymphs.  Upon hatching, the larva consumes the innards of the aphid, emerging as an adult.  In true science fiction style, a papery shell of the aphid nymph, called a mummy, is left behind after wasps emerge.

Other natural predators of aphids include lady beetles, hover flies, lacewings and other species of parasitoid wasps.  Many times, natural enemies of aphids can eventually even the playing field and achieve fairly good control over time.  I’ve found that, given some time, many aphid outbreaks on my milkweeds are typically put in check by predators, especially if some very basic cultural controls can be done to knock back the rising initial numbers of the colony.

Like most aphid species, colonies of oleander aphid crop up on new growth, making it especially easy to see at the tips of mature milkweed plants as they start to amass.  The rapidly growing, plump aphids are really easy to squish and just wipe off leaves.  So, I quickly take a swipe across my plants as I have time, which doesn’t get all of them, but knocks them back significantly until predators can find them.

Control measures need to be carefully weighed to avoid impacts to monarch caterpillars that may be feeding as well.  A steady stream of water can be used to knock off aphids and break up colonies, but it must be really targeted.  Insecticides are not recommended for control as they will certainly have unintended consequences for monarchs.  Many times, I just accept some milkweed damage from aphid feeding to ensure monarchs are unimpacted.

Since aphids focus on lush new growth, their colonies tend to diminish as hot weather puts stress on plants.  In most years, July heat has this effect, but our rainy summer weather has certainly eased the heat stress.  If there is one reason to look forward to some August heat, maybe aphid control is it?  In the meantime, squish away to keep ahead of the feeding frenzy.