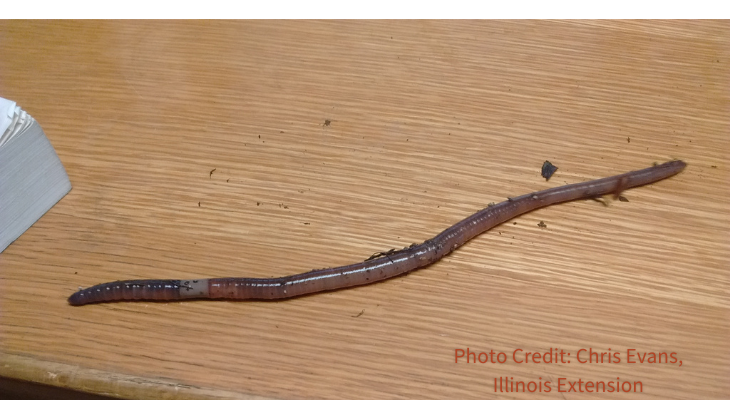 Each gardening season there seems to be a new invasive species we have to worry about.  Unfortunately, this is the sad reality of our ever-globalizing economies.  Despite the best measures to track and limit the indiscriminate spread of exotic biota, regulatory agencies and the industries involved just cannot stay ahead of things.  Without a crystal ball to predict the future, we are often left with a problem that was unforeseen, but irreversible.

Jumping worms (Amynthas spp.) certainly fall into the description above.  Also known as snake worms, crazy worms or Alabama jumpers, these exotic earthworms were inadvertently introduced into the US as fishing bait.  Inevitably, they have made their way into the environment and are being detected in locations across Illinois.

“Jumping worms are popping up all across the state.  They are definitely a growing problem that landowners are having to deal with,” says Illinois Extension Forestry Chris Evans.

Over the summer months, the Champaign County Extension office alone has received numerous reports of jumping worms and has confirmed 3 cases in the area.  Extension offices around the state continue to receive new reports each year.

“In 2021, we confirmed jumping worms in 13 new counties and the list continues to grow,” notes Evans.

Since the initial detection in Illinois, back in 2015, this pest has been confirmed in a total of 35 counties across the state, with 5 counties currently suspected to have jumping worms.

“The growing list of new counties is not necessarily due to rapid spread, but rather from more folks learning how to identify this invasive and reporting existing infestations.” Evans explains.

As word has spread about this pest, gardeners are at the front lines for detection of new populations since we tend to interact with the soil environment frequently.  Additionally, it’s really important for us to be on the look out because we are also the main conduit for spreading this pest.  On their own, jumping worms are slow to spread, but when they get moved with soil, on plant roots or in mulch, humans can very rapidly spread these unwanted invertebrates.

“As the worms feed, they alter the soil by increasing aggregate size, creating larger clumps with more space in between,” Evans says. “This is caused by their castings making up a higher and higher percentage of the soil. This larger aggregate size really changes the soil’s ability to hold water and store nutrients.”

Over time, jumping worms can wreak havoc on natural areas as they alter the soil environment by consuming more and more soil organic matter.  Reduction in organic matter sways soil microbial populations and creates a ripple effect that ultimately works to lower diversity of both flora and fauna across the ecosystem. For example, millipedes and salamanders are both negatively impacted by the presence of jumping worms.  The worms may also facilitate the spread of invasive plants by altering the ecosystem in such a way as to promote invasive plant establishment.

Although these voracious consumers will greatly impact natural areas, their effects on the home landscape can be addressed with many of the practice we use to boost plant health.

“This is not a ‘sound the alarm and panic’ situation, but it is one to keep an eye out for and know about,” Evans explains. “Jumping worms do not disperse very fast on their own. It is human-aided spread that can be an issue.”

What Can Gardeners Do?

As gardeners, we can do two things to help address the jumping worm problem:

As their name implies, jumping worms typically thrash wildly or wiggle when disturbed, which is a main reason why they were chosen as bait species.   Their body is smooth, glossy dark gray to brown color with a distinctive cloudy-white band, called the clitellum, completely encircling their body.  Other earthworms have a more colored clitellum that may not complete encircle the body.  In addition, the clitellum on jumping worms is flush with the tissue around it, whereas other earthworms have a raised clitellum that protrudes.

Gardeners need to limit the movement of plant material to ensure that tiny jumping worm eggs are not unintentionally transported with plants.  If you do have to move plants from one location to another, consider washing plant roots to remove all soil.  If working at multiple garden locations, be sure to clean tools and shoes before entering a new site.

Eggs can also be moved in soil, compost and mulch, so be sure to use commercially heat-treated sources.  Commercially grown plant materials use potting soil and other soilless media, so it is still safe to shop at garden centers, by mail order and at other businesses.

Currently, there are no science-based control recommendations for jumping worms, other than limiting their spread.  It is up to gardeners like us to be sure we aren’t inadvertently introducing jumping worms to new places.

For more information about how to identify and report jumping worms, as well as tips for limiting their spread, please view the most recent Illinois Extension factsheet at go.illinois.edu/JumpingWorms2021.