Nothing beats the warmth of a crackling fireplace on these coldest days of the year.  Each winter, as my family enjoys the cozy warmth of our woodstove room, I’m always thankful for the firewood supply we’ve been fortunate enough to accumulate over the past season. I enjoy the process of collecting and splitting wood that we can salvage from downed trees in our area.  It’s great exercise which results in some supplemental heat during the colder part of each winter.

Most of the wood we burn comes from sources very near to our house, but from time to time we’ve purchased firewood from others. When we do, I’m always very picky about the wood we bring to our property. Some of this pickiness is based on tree species, since certain species burn much hotter than others, but most of my concern centers on the location this wood came from prior to being stacked in our woodshed. 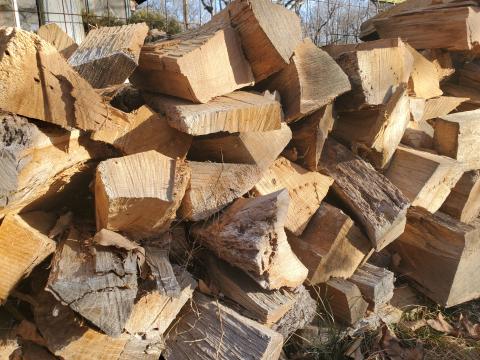 Moving firewood has become one of the major pathways for invasive species to reach new areas.  Many of these pests are transported right along with the wood since they use trees for all, or part, of their life cycle. It’s become a growing problem in recent years, resulting in major outreach efforts by the US Dept. of Agriculture, State Agencies and others who are concerned about impacts to our urban and natural forests from these damaging, non-native pests.

The emerald ash borer (Agrilus planipennis) has been one of the most significant firewood hitchhikers in recent history. This non-native insect is single-handedly eliminating ash from forests across the eastern US as larvae feed on and kill native ash trees. With plentiful dead ash trees in its wake, there is no shortage of firewood in areas of heavy infestation and, when transported to new areas, larvae often hitch a ride.

As researchers have looked at natural dispersal rates of EAB vs human-aided dispersion, it has become abundantly clear that human movement of ash has greatly increased the rate of spread. This pest was first identified in Detroit during 2002 and has since spread to Northern Illinois (2006) and downstate. EAB was first identified in our area in Champaign County (2010) and currently is considered present in all counties in our area. This rate of spread is could not have occurred without human help.

Prior to EAB arrival in Illinois, movement of ash firewood was restricted based on both state and federal quarantine requirements. State officials closely monitored the spread of EAB, systematically applying county-level firewood quarantines to limit its spread. As of 2015, EAB was so widespread across Illinois that state quarantines were lifted.  Federal quarantines have also been lifted and these agencies shift their efforts from stopping the spread to managing the pest with biological controls and other methods.

Although EAB-related restrictions have been lifted, there is still concern with the movement of firewood in Illinois.  Specifically, the European gypsy moth (Lymantria dispar) has spurred quarantines for 8 counties in northeastern Illinois since its first detection in 2006. This pest is less host-specific and its egg masses may be spread by firewood from a wide range of species, not just ash. Fortunately, the Illinois Dept. of Agriculture is very active in both monitoring and control of this pest which has greatly reduced it spread. However, the potential for new infestations in other areas remains if firewood from these northern counties is transported out of the quarantine area.

You can stop the spread

All of us need to be cognizant of where we transport firewood and where we source our own supply. Beyond the insect pests mentioned here, there are diseases that can inadvertently be brought to Illinois on firewood as well. Its difficult to predict where the next threat may come from and limiting human spread via firewood is an important part of stopping the spread of invasive species to our state and others.