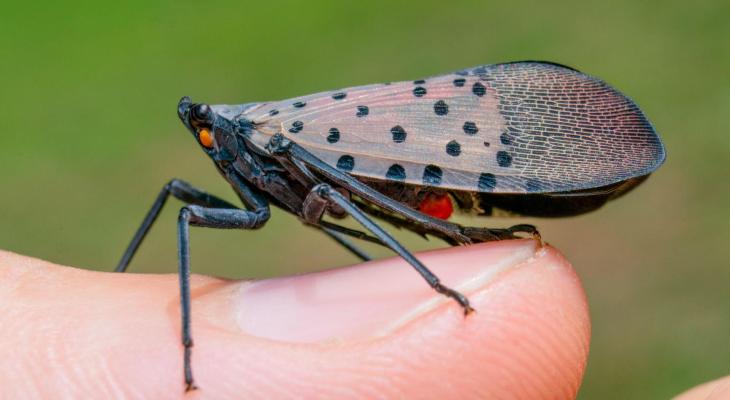 The spotted lanternfly (Lycorma delicatula) is an invasive pest that impacts a wide range of plants as it feeds throughout the growing season.  This non-native leafhopper was first identified in Pennsylvania back in 2014 and has since spread to 10 other states.  Recent discoveries in Indiana and Iowa seem to be a sign of what is to come for Illinois, so we all need to be on the lookout for this new threat.

Over 100 plant species have been identified as hosts for SLF. In our climate, we should only expect one generation of SLF per year, which hatches from overwinter eggs in the late spring.  Nymphs progress through 4 developmental stages, called instars, until late summer when they emerge as adults.

Nymphs are highly mobile and crawl across the landscape feeding and then moving on to the next plant. They show preference for the tender new growth of trees and shrubs as well as herbaceous plants such as perennials, annuals or even a variety of weed species.

Adults tend to focus on larger woody plants with a strong preference for tree of heaven (Ailanthus altissima) which is a non-native, also invasive, tree from the SLF’s home range.  Feeding preference has also been shown for grapevines (wild and cultivated), maples, black walnut, river birch, willow and sumac among the wide range of known host plants.

Like other leafhoppers, this pest feeds on plant sap using its piercing-sucking mouthparts.  They acquire nutrients and sugars from the sap but are not able to completely digest all carbohydrates it contains.  So, they excrete the excess sugars as waste, which is commonly referred to as honeydew.  This sticky, watery substance coats anything under their feeding area, from parked cars or patio furniture to other plants and animals.

Honeydew becomes a problem as it accumulates because it is often colonized by sooty mold, which creates a dark colored coating.   It can leave lasting stains on many surfaces, both natural and human-made, but more importantly, it physically blocks light as it coats leaf surfaces.  This can lead to drastically reduced photosynthesis on heavily coated plants.  In heavily infested woodlands, sooty mold accumulation has been noted to kill understory plants.  In production areas, such as vineyards, sooty mold accumulation can ruin fruits or other edible plant parts.

Certain highly favored hosts, such as tree of heaven, walnuts and grapevines have been killed by SLF feeding alone, but feeding damage from this pest rarely kills plants. However, it is commonly a plant stressor, especially if SLF populations are significant.  The degree of damage varies widely based on host species, local SLF populations (which can vary widely from year to year), time of the year and a variety of other factors.  Long term feeding by SLF can certainly weaken plants, both newly planted and established, and will be a factor for both landscape plants and certain commercially important woody species as this pest reaches our state.

Last year, SLF was found in eastern Indiana, which is certainly bad news, but somewhat expected since over 40 counties in Pennsylvania currently have identified infestations.  This summer, the invasive pest was reported in central Iowa, which is especially startling news. So far, it has not been identified in Illinois, which begs the question “How did it skip Illinois”?  Or, is it already here and we simply have not identified it?

As with many invasives, human spread is the primary vector for SLF dispersal. This pest is not picky about where egg masses are laid, selecting a variety of hard surfaces, including highly mobile things such as vehicles, train cars and campers, which means that a wide variety of vehicles which visit infested area in the late growing season can bring eggs to new locations.

In Illinois, we need to be on the lookout for this pest. Adult insects are present now and through the end of the growing season.  I have centered my scouting on its preferred host, tree of heaven (pictured below), by checking up on specimens around central Illinois throughout the growing season.  However, its important to be on the lookout everywhere given its wide range of host preferences.  Please be aware of this pest and watch landscaping and natural areas for all life stages, including the presence of egg masses.

For more information, including detailed photos and descriptions of spotted lanternfly, please check out this Good Growing Blog post by Ken Johnson with Illinois Extension.

If you think you have identified SLF in Illinois, please report potential findings to lanternfly@illinois.edu, or your local extension office.