Insects and the Cold 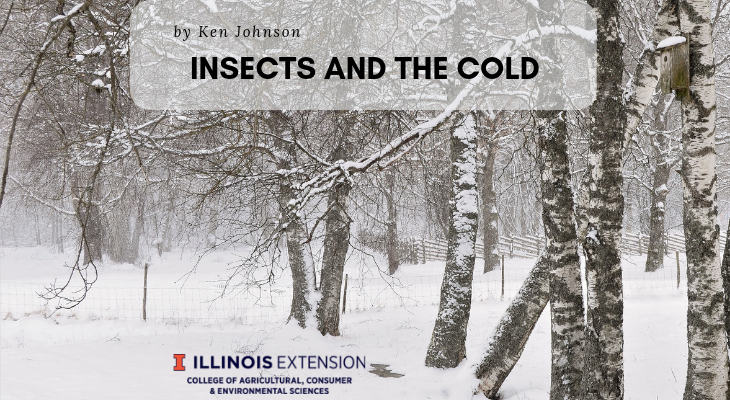 With the recent cold snap/polar vortex many people have also been wondering about how it's going to affect the insect populations. I hate to be the bearer of bad news, or perhaps good news (depending on your thoughts on insects) but, for the most part, most insects will survive just fine. Insects use a variety of strategies to survive through the winter.

The first strategy some insects will use is to avoid the cold altogether. Some insects that we find in Illinois won't survive our freezing winter temperatures. So, instead of trying to make it through the winter here, they'll survive elsewhere. An example of this would be monarch butterflies. As we approach fall, monarchs will begin to migrate south and will eventually reach Mexico where they will overwinter. As temperatures begin to warm again come spring, they will begin migrating north and their children or grandchildren will arrive in Illinois. Others, like armyworms and potato leafhoppers, survive in Southern states and will migrate north as temperatures begin to warm.

For those insects that stick around, low temperatures aren't necessarily the problem; the formation of ice crystals in their bodies is what makes survival difficult. If ice crystals rapidly form in their bodies, their cells will burst, resulting in damage and likely death. Some insects, like woolly bear caterpillars, will avoid this by using chemicals to control the way in which and where they freeze and therefore minimize damage to their cells (these insects are called freeze tolerant).

Just because temperatures don't hit the supercooling point of an insect it doesn't mean some won't be killed. Perhaps the insect people are most excited about being 'wiped out' by the cold is emerald ash borer. A study by the U.S. Forest Service showed that 5% of the insects die at 0ᵒF, 34% at -10ᵒF, 79% at -20ᵒF and 98% at -30ᵒF. That being said it's important to note that emerald ash borer doesn't overwinter in exposed areas.

While air temperatures in many places in Illinois got colder than the above supercooling points, most insects will overwinter in protected areas where temperatures did not get nearly as cold. For example, white grubs (like Japanese beetles) in the soil will not be exposed to extremely cold temperatures because the soil will insulate them. Others will seek shelter under leaf litter (codling moth), under bark (emerald ash borer), or even in your home. All of these will provide some protection from cold temperatures. Snow is also an excellent insulator, and all of our snow offered another layer of protection. While the brutally cold temperatures may have seemed like they lasted forever, in reality, they only lasted a relatively short time and likely didn't drop temperatures in these protected areas low enough to 'wipe out' these pest insects.

While the cold temperatures we've had have likely killed some insects, come spring it should be business as usual.