Why do tree leaves change color in autumn? 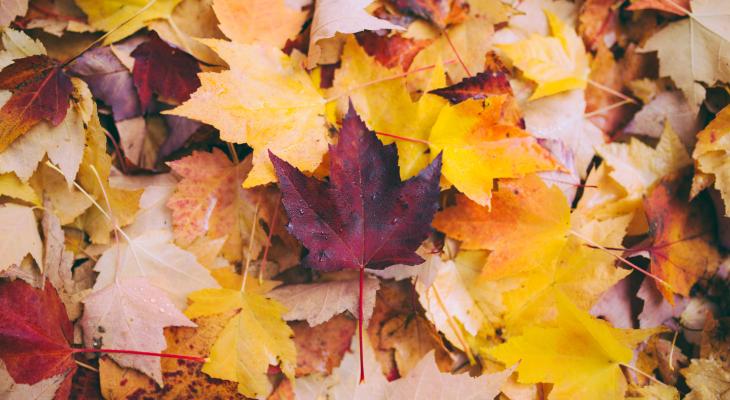 In the language of folklore, Jack Frost has often been credited with spurring the onset of fall color by pinching leaves with his icy fingers. Obviously today we know that's not the case, but for a long time, scientists thought coloring of fall leaves was caused by the accumulation of waste products over the season that were then revealed as the green chlorophyll pigment faded away. This, as it turns out, is mostly untrue.

Like all of nature’s displays, fall color is fleeting, so get outside and enjoy autumn’s hues!

The science of fall color

What really happens to produce fall’s leafy display? A combination of shortening day length and cooling temperatures are picked up by receptors in the tree that begin to produce hormones to initiate leaf senescence. Senescence is the process of leaves’ breaking down complex molecules into smaller soluble ones, such as sugars and amino acids. These smaller compounds are resorbed by the tree for use in spring. Resorption of the sugars and amino acids allows the tree to recover energy that would otherwise be lost when the tree sheds its leaves at the end of senescence.

Leaf senescence also includes the formation of the abscission layer, a barrier that forms at the base of the leafstalk and severs the flow of materials between leaf and tree. Once the layer is complete, the leaf is ready to fall and is usually removed from the tree by wind or rain.

So what role does fall color play in leaf senescence? It takes energy for the tree leaves to resorb those soluble compounds back into the tree, which means the chlorophyll still has a job to do in producing this energy. But with chlorophyll quickly degrading, the leaf is now vulnerable to ultraviolet exposure from sunlight, pests that might take advantage of a dying leaf, and a host of other environmental factors, including freezing temperatures. This is where the other tree leaf pigments come into play; they help protect and give a boost of energy to resorb those nutrients back into the tree.

The pigments of leaves

The orange and yellow colors you see in the fall are carotenoids. They are present throughout the growing season, but chlorophyll’s green pigment is so overpowering that our eyes can't see the others. In the growing season carotenoids and chlorophyll work together to absorb visible light energy, which is converted to chemical energy through photosynthesis. In the fall, chlorophyll breaks down more quickly, revealing the yellow and orange of the carotenoids as these pigments continue to process energy for the resorption process. Some of our favorite vegetables—tomatoes, carrots, sweet potatoes—get their bright oranges and yellows from the carotenoid pigment.

Tannins cause the autumn browns and coppers seen in fall in a lot of in oaks and beech trees. Tannins, which make leaves taste very bitter, are considered a waste product of certain plant processes. Leaves store them up as a defense mechanism against pathogens or anything that might feed on them. This pigment is also present throughout the year, but it is visible only after the chlorophyll fades.

The brilliant shades of red, purple, and crimson come from anthocyanin. Yellows, golds, oranges, and even browns are fairly consistent from year to year, but anthocyanin can be unreliable. Anthocyanin forms as plant sugars accumulate in the leaves because of the ever-constricting abscission layer, which slowly narrows the tubes that allow the tree to resorb nutrients. The more sunlight a leaf is exposed to, the more sugar is produced; the more sugars that accumulate in the leaf, the more anthocyanins are produced, and the redder the leaf becomes. Not all plants are genetically programmed to produce anthocyanins, but some produce reddish foliage all year long, including the well-known Crimson King Norway Maple.

Anthocyanins perform a multitude of functions in fall, including absorbing free radicals and protecting plant leaves as they move nutrients back into the tree. They also promote frost tolerance to help ensure that leaf senescence completes in time for the nutrients to move back into the tree. There's also a theory among some scientists that the anthocyanins’ red color warns leaf-feeding insects to stay away.

Good Growing Tip of the Week: Which autumns produce the best fall color? Windy, rainy fall weather is not your friend since these conditions tend to knock leaves down before they're ready to give their full display of color. The best fall color is brought on by dry, sunny days and cool—not freezing—nights.