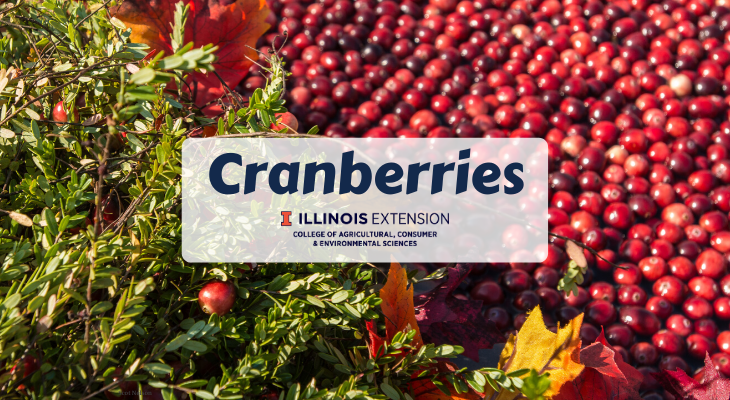 Cranberries are a common sight this time of year. Americans consume nearly 400 million pounds of cranberries per year, and we consume about 20 percent of that during Thanksgiving week! Whether you eat them fresh, dried, as sauce or jellied or drink them, they are staples at many holiday meals. They can also be used in a variety of ways while decorating for the holidays.

American cranberry, Vaccinium macrocarpon, is native to central and eastern Canada, as well as the northeastern and north-central United States (including Illinois). Native Americans used cranberries in a variety of ways, such as a dye for fabric, as medicine, as well as a food source. European settlers referred to the fruit as “crane berry,” due to the flowers resemblance to a sandhill crane. Somewhere along the line, the “e” was lost, and they became “cranberries.”

Contrary to popular belief, cranberries don’t grow in standing water or submerged in water. In the wild, they inhabit swamps and bogs. Like their blueberry cousins, they prefer acidic soils (pH of 4.0 – 5.5). Cranberries also need well-drained (sandy) soils that are high in organic matter and are consistently moist. It is possible to grow cranberries in your garden; you’ll probably need to do some significant soil amending to get the acidic, sandy conditions that cranberries like.

Cranberries are a low-growing woody shrub with small evergreen leaves that will reach about eight inches in height. While the plants may be short, their long sprawling horizontal stems, or runners (stolons), grow along the soil surface, rooting at intervals, and can reach six feet in length and form a dense mat. Plants will produce whitish-pink flowers in late June and early July. While cranberries can self-pollinate, they rarely do because of the structure of the flower. Instead, cranberries are usually pollinated by bees. They will produce green berries that will turn white and eventually deep red when fully ripe. Depending on weather and the cultivar, it can take from 60 to 120 days for berries fully ripen (typically around 80 days).

Commercially grown cranberries are harvested from mid-September through mid-November in one of two ways. Some may be dry harvested for fresh markets. Mechanical pickers, which resemble lawnmowers, will rake the plants to remove berries. These berries will then be deposited onto conveyer belts and into boxes or bags. The berries will then be screened to remove debris and cleaned before being packaged for sale.

A majority of cranberries will be wet harvested. These cranberries are typically destined for use as juice, sweetened dried cranberries, or added to other products. First fields will be flooded (likely why people believe cranberries grow in water) with six to eight inches of water. Then specialized tractors that have agitating, spinning rollers on them will remove the berries from the plants. Following the removal of the berries, the bog will be further flooded to about two feet deep. The cranberries will float to the top and will be corralled to one side of the field and loaded onto a conveyer and then onto a truck. In addition to making it easier to harvest berries, flooding cranberry fields also protects the fields from freezing during winter and early spring.

Whether you like your cranberries as juice, sauce, or fresh, make sure to make this native fruit part of your holiday festivities.

Good Growing Fact of the Week: Wisconsin produces about sixty present of the cranberries grown in the United States. Massachusetts produces about one-quarter of the crop and most of the remaining being grown in Oregon, Washington, and New Jersey.