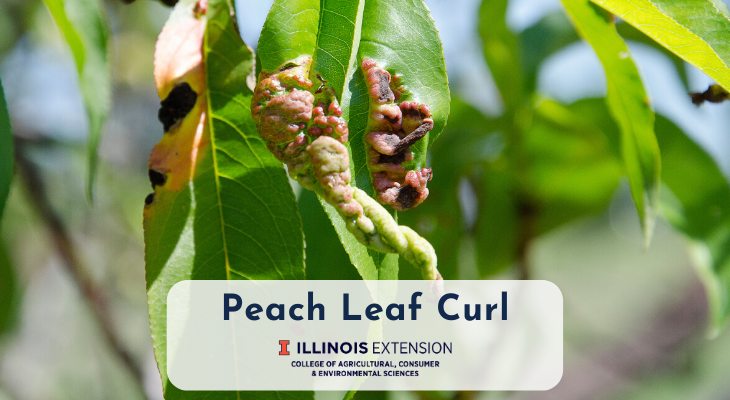 Have you ever noticed the leaves of your peach tree becoming curled and puckered and turning reddish or purplish? If you’ve seen this, you’ve likely had peach leaf curl.

Peach leaf curl is a fungal disease caused by Taphrina deformans. It is one of the most commonly encountered diseases of peaches and nectarines, especially in home plantings. While it primarily affects the foliage, it may also infect blossoms, young twigs, and fruit.

Peach leaf curl is relatively easy to recognize. Infected leaves become thickened and leathery and will also be distorted and puckered. The distorted areas are rather noticeable because they will become pink, red, or purple. Once the fungus begins to produce spores, the affected areas will turn grayish-white and appear velvety. Eventually, the leaves turn yellow and fall from the tree. In cases where trees are severely infected, the trees can be defoliated. New leaves may be produced in June or July to replace the fallen leaves, especially in severely infected or defoliated trees.

On rare occasions, flowers and fruit may also be infected. If fruit becomes infected, it will have shiny, reddish, raised, warty spots. Infected fruit will commonly drop prematurely as well.

Peach leaf curl doesn't usually kill trees, but it can weaken severely infected trees. This can cause the trees to be more susceptible to other problems (diseases, insects, stress). There is also an increased chance of winter injury, as well as the potential for a smaller peach crop the following year.

Peach leaf curl overwinters on buds and the bark of trees. During cool, wet conditions in early spring, spores from the fungus will infect the leaves when buds begin to swell. In order for the leaves to become infected, there needs to be at least 12 hours of moisture (high humidity or rain) and temperatures between 50° and 70°F. Once the leaves mature and the weather warms up (>70°F), infections stop. All of this means that disease development is limited to a short period in the spring.

Fortunately, peach leaf curl isn’t difficult to control. However, the timing of treatments is critical. To prevent infections, a dormant spray of chlorothalonil, lime sulfur, or a copper based product such as Bordeaux mixture should be applied to trees in late fall after leaves have dropped, or early spring before the buds begin to swell. Once buds start to swell, it is too late to prevent infection.

Once leaves are infected, there is nothing that can be done to get rid of the disease this year (if you see it, it’s too late to do anything about it). If you do end up having peach leaf curl, take steps to promote tree health and reduce stress such as: fertilizing (soil test first), watering when needed, and thinning fruit to reduce demand on the tree.

Good Growing Tip of the Week: Using disease resistant cultivars is a good way to help manage plant disease. While all peach cultivars are, to some degree, susceptible to leaf curl, Redhaven and cultivars derived from Redhaven are more resistant.