Starting a Garden: Cool-Season Vegetables | And my top 5 cool-season crops to grow 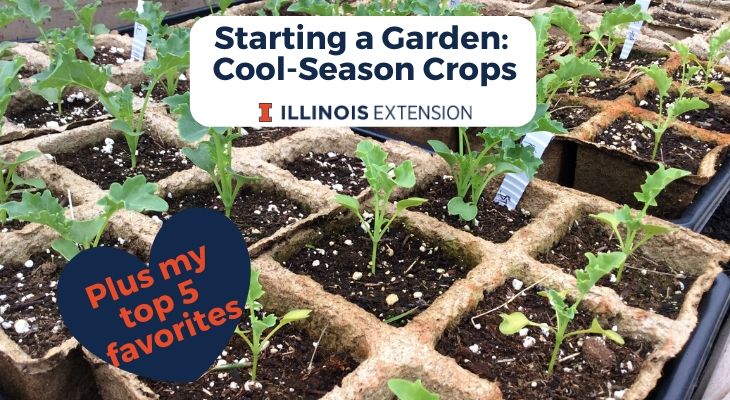 For many, gardening takes place in the summer. However, for me, and a growing number of gardeners, we are growing in the garden nearly all year long!

Vegetables can be categorized into two categories; warm-season and cool-season crops. Warm-season crops contain classic garden vegetables such as tomatoes, peppers, zucchini, eggplant, and cucumber. Warm-season crops are planted or sown later in the spring after all danger of frost as passed. Cool-season crops include some popular crops like broccoli, peas, and carrots, but they are some types of cool-season crops that are becoming popular such as kohlrabi, kale, turnips, and Asian green (like bok choi). Vegetables breeders have shifted much effort in creating varieties that perform well and taste good.

If you are desperate to get outside in the garden in the early spring (let’s face it, we all are!), don’t make the mistake of planting warm-season crops too soon. Utilize cool-season crops early in the spring. They are well-adapted to grow during a time of year with random frosts, even snow.

Some cool-season crops like kale and brussels sprouts are very cold hardy and will stand up to freezing weather.

I start many of my cool-season crops inside to get an even better jump on the growing season. Following is a table adapted from the University of New Hampshire Extension, that details recommended times to start seed indoors and then when to transplant out in the garden.

T – Crops marked with a T should be started from seed indoors and set out as transplants.

S – Crops marked with an S have a relatively short harvest season, which can be prolonged by doing multiple smaller “sequence” plantings.

Looking for information on starting seed indoors? Check out our blog post and video on seed starting.

Don’t be lulled into thinking cool-season crops are only for the early spring. Indeed these crops thrive in the autumn. Personally, fall is my favorite time to garden. Sometimes and with a little extra protection, you can extend these crops into the winter months.

As the weather cools in autumn, plants convert carbohydrates into sugars to protect their cells from freezing temperatures. This sugary ‘antifreeze’ imparts a deliciously sweet flavor to many cool-season crops during the fall and winter months. Spinach and carrots harvested in the late fall and winter are especially a treat that one must experience!

A majority of work for a fall and winter garden takes place in the summer. Most fall vegetables should be seeded in the ground by early August, but this can vary based on the crop and your location. The key is to get plants established when we still have ample daylight. In the fall as the days shorten, plant growth slows considerably. Once we hit late fall, plant growth has all but stopped. At that point, we are just maintaining plants until we get around to harvest.

As an example, in late August I seeded carrots. By the time we got to late October, the plants virtually stopped growing due to shorter daylight and were ready for harvest. You could harvest them all at once and store them in the high humidity bin in the fridge for at least one month. However, I store my carrots where they are growing in the ground through the winter and harvest when I need some.

My top-five favorite cool-season crops are: