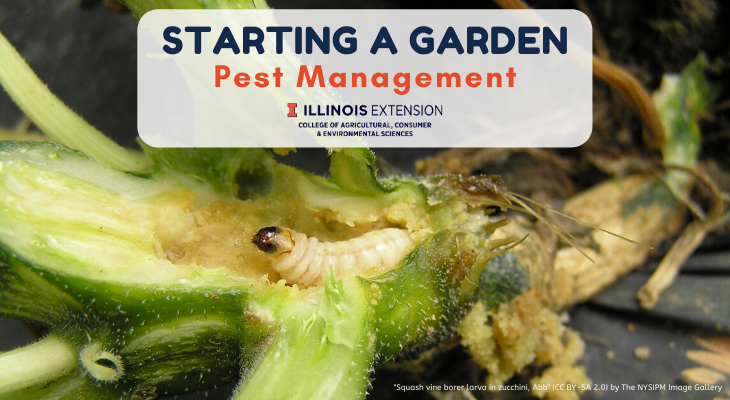 As the saying goes, the only things guaranteed in life are death and taxes. If you’re a gardener, you can also include pests to the list of life’s guarantees. Now that it's started to warm up enough to get out and plant the garden, it also means it’s warm enough for weeds, insects, and diseases to become active too. So, get outside and start scouting your gardens.

When faced with pest problems this year (and you will be), consider using integrated pest management (IPM). IPM is an approach to reducing insect pest, weed, and disease populations to an acceptable level (we don’t typically ‘wipe out’ the pest) using a variety of different techniques. There are four techniques used with IPM: cultural, physical/mechanical, biological, and chemical.

The idea behind cultural management is growing and maintaining a healthy plant as well as making the growing environment less suitable for pests. A healthy plant is less susceptible to disease, and they are better able to withstand attacks from insects and competition from weeds. This means growing the right plant in the right place at the right time.

Make sure you are planting plants that are appropriate for the site they will be planted in. Don’t plant something that needs full sun in the shade or something that requires acidic soils in alkaline or neutral soils. Placing a plant in the wrong environment can prevent the plant from reaching its full potential and will likely lead to a weak plant that has more than its fair share of problems. If you have known disease problems in an area, looking for resistant cultivars to these diseases can help reduce problems you may have (this can also work for some insects). In addition to selecting the right site for your plant, make sure it is getting the proper fertilization and enough, but not too much water (too much water causes as many problems as not enough). You can also alter the time of your planting to avoid a particular pest. For example, plant summer squash in early July to avoid squash vine borer because they have finished laying eggs by then.

Pruning plants can help open up their canopy, thus helping them dry out faster. This makes the environment around the plant less suitable for disease development. Sanitation often overlooked when it comes to pest management. By removing plant residue (dead plant material) from the garden, you can remove insects and plant pathogens that may be present, as well as making the environment less suitable for them. Finally, mulching can help retain soil moisture (you won’t have to water as often!), keep the soil cooler, and help keep weed populations down.

The goal for physical/mechanical management is to physically eliminate pests. This can be done in a variety of different ways, such as hand picking Japanese beetles, bagworms, or other caterpillars. Pruning out diseased branches, webworms, or galls. Pulling or hoeing weeds in flower beds or vegetable gardens and putting up barriers to prevent pests from getting to your plants such as bird netting or fencing for rabbits and deer.

In biological management, pests are managed with other living organisms (often called natural enemies). Not all, in fact, most insects are not pests. There are predators such as ladybeetles (aka ladybugs) that eat small soft-bodied insects like aphids, scale, and mealybugs. Lacewing larvae, sometimes referred to as aphid lions, feed on aphids, scale, mealybugs, small caterpillars, and occasionally mites.

There are tiny parasitic wasps, too small to sting people, that lay eggs inside of aphids, and when the eggs hatch, the larvae eat the aphid. Other parasitic wasps lay eggs on caterpillars. You may have seen these in your garden before if you grow tomatoes. Infected hornworm caterpillars will have a mass of what looks like eggs on them, but they are actually cocoons. If you see this, don’t get rid of that caterpillar. Eventually, the wasps will emerge from the cocoons and will go on to attack more caterpillars. Like plants (and us), insects can also be infected by fungus and bacteria, which may help manage their populations.

In addition to their insect prey, many natural enemies need sources of pollen and nectar for food. In fact, some adults, such as syrphid flies, feed primarily or exclusively on nectar and pollen (the larvae feed on other insects). This is particularly important early in the year before pest populations start to build. By planting plants that are attractive to them, such as dill, cilantro, fennel, cosmos, and blanketflower, you can help attract and encourage them to stick around.

The final management technique used is chemical. The goal is to manage pest populations by using pesticides, whether it is an insecticide, fungicide, herbicide, etc. If you are using IPM, chemicals should only be used as needed. In some cases using pesticides may be the best option to manage a particular pest. However, oftentimes one of the three other techniques (cultural, physical/mechanical, and/or biological) can be used. If you do go the pesticide route, you want to try and use pesticides that are the least toxic possible. Before using any pesticide product, make sure to read the label and follow all the directions. The label will tell you where you can legally use it, what it will control, how much you should use, how often you should use, and any precautions you need to take while using the product.