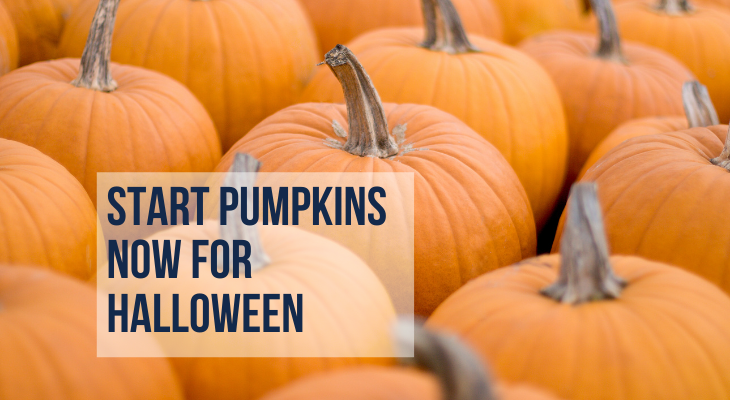 Why are we talking about pumpkins in June? Because if you want home-grown pumpkins for Halloween, it is best to get them planted now!

Good Growing Fact
Did you know Illinois is ranked #1 for pumpkin production with more than 10,000 acres planted in 2019? Morton, IL, is considered the Pumpkin Capital of the World because 85% of the world’s canned pumpkin is packed there.

How to grow pumpkins

Pumpkins are warm weather-loving vegetables that must be planted after all chances of frost. The traditional Jack-O-Lantern pumpkins take about 110 days to mature, so it is important to plant them at the right time to ensure pumpkins for Halloween.

Plants can be direct-seeded or transplanted in late spring when soil temperatures have reached at least 70°F and frost has passed.

Come this fall, it is best to harvest pumpkins when they have reached a deep, solid color and the rind is hard. Clip fruit stems close to the vine to allow for a handle, but avoid picking pumpkins up by the handle to prevent damage to the skin/rind, and pumpkins without stems do not keep well.

Storage: To keep the pumpkins in good condition for Halloween, curing is recommended which can be done in the field for 5-7 days or indoors at 80-85°F and 75% to 85% relative humidity. White varieties should be cured indoors to prevent yellowing of the skin.

With a little bit of forward planning, you can have pumpkins to enjoy this fall! Or if you’re like me, you’ll leave the pumpkin growing to the pros.