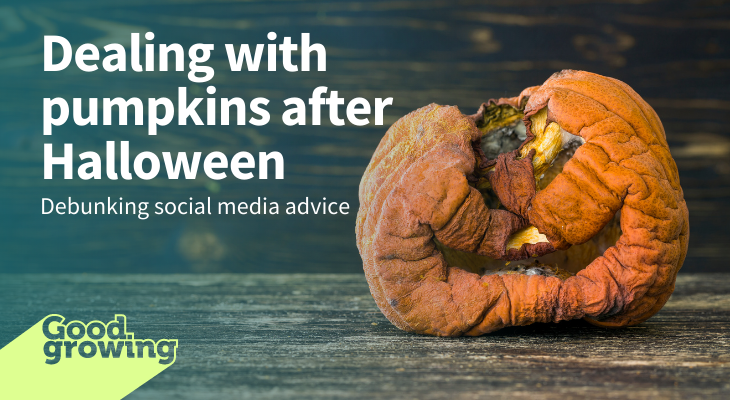 As the calendar turns from October to November, toothy Jack-o’-lanterns start to look like deflated basketballs. This means millions of Americans need to dispose of billions of pumpkins. While many people toss these festive yet mushy winter squash into the trash, this adds an immense amount of organic material into the landfill. Typically, in a landfill, this material gets buried and rots in an environment devoid of oxygen, which creates the potent greenhouse gas methane.

Yet, pumpkins are nothing more than overgrown vegetables. Something must want to eat these things. Right? The social spheres are buzzing with alternative uses for a Jack-o’-lantern past its prime, but there seems to be some advice that deserves more attention than a Tweet can afford.

Can I find woods, fields, or nature preserves to smash open pumpkins to compost?

Leaving pumpkins on private property or a nature preserve is considered littering and is illegal, especially for a nature preserve. It is all too common for natural areas to become a dumping spot for yard waste, including pumpkins and straw. The thought is that these items will compost, but this is not true composting.

“Straw and pumpkins smother native plants and creates odd little microhabitats that are not healthy and full of molds. Pumpkins can now be found growing in preserves, probably from last year’s pumpkin dump,” says Peggy Dotty, University of Illinois Extension energy and environmental stewardship educator. “The straw not only smothers plants, but takes forever to decompose and they dump it right on the road so staff has to pick it up.”

Can I leave broken-up pumpkins for wildlife to eat?

Lots of different animals will eat pumpkins. Pumpkin seeds can be baked without salt or other seasonings and used in a bird feeder. Like humans, the critters may be a bit choosy and go for the fresher pumpkin.

“Pumpkins that have been used as Jack-o’-lanterns or other decorations could also be used as a snack for wildlife,” says Maureen Frank, Ph.D., AgriLife Extension wildlife specialist. “But it’s probably best to share with birds only.”

Feeding wild animals can create problems. Leaving pumpkins in ditches can draw animals close to traffic where they may get hit. Plus, many municipalities are actively trying to manage out-of-control wildlife populations, such as white-tailed deer. Did you know higher deer populations can be tied to increasing incidences of Lyme disease?

Make sure to remove any decorative items such as metal, plastic, and candles. Each year the University of Illinois Wildlife Medical Clinic treats will animals that get trapped or tangled in fall decorations.

Are pumpkin seeds a natural dewormer?

The idea of using pumpkin seeds as a dewormer has been passed down from previous generations. There has been some research on this topic and the studies I’ve read do not show any correlation to pumpkin seed consumption and worm control in livestock. Some researchers do show that pumpkin seeds may help to support conventional deworming medication but is no substitute.

Veterinarian Samantha J. Sander who is a Clinical Assistant Professor at University of Illinois says the research is unclear on if pumpkin seeds are an effective dewormer. A compound in pumpkin seeds, cucurbitacin, is a dewormer, but different squash have different levels and the dose and effectiveness is unknown. It also varies depending on the animal and the worm.

She adds that dogs can safely eat pumpkin puree, but large, hard chunks can cause an obstruction. Cats benefit less from pumpkin, but it can be a good source of fiber.

Can I give pumpkins to a livestock farmer?

When it comes to domesticated livestock, hogs and poultry seem to be the most reliable consumers. Poultry will need the pumpkins smashed open or cut into chunks. Hogs have the strength to break open the pumpkins themselves. Since pumpkins are not a routine part of their diet, this can cause digestive upset to livestock.

Some university specialists have experimented with mixing pumpkin with straw silage for cattle with varied success. Regardless of what and how you're feeding livestock pumpkins, avoid rotted pumpkins.

Can I give pumpkins to zoos, wildlife rehab centers?

Sander who is also the Director of the University of Illinois Wildlife Medical Clinic says zoos and wildlife rehab centers often use pumpkins as food or enrichment.

“The biggest caveat with all of this, is that the pumpkin has to be fresh,” Sander says. “Moldy pumpkins or those with significant bacterial contamination can be dangerous.”

Carved pumpkins break down quickly and whole pumpkins that have been sitting in the sun on a porch for weeks can quickly become contaminated and shouldn’t be given to animals to eat.

What can be done with old pumpkins?

Pumpkins can be incorporated into a designated compost pile. A blemish-free, uncarved pumpkin could last for months before it begins to break down. Chopping up the pumpkins help to speed up decomposition. The benefit to Jack-o'-lanterns is they start breaking down as soon as we carve fun and spooky designs into their flesh. Mix and turn the compost pile to incorporate more air into the interior to improve the composting process. The compost from this year's pumpkins can be used on next year's crop!

Drop off your old Halloween pumpkins at a municipal or commercial composting facility. Several cities and towns have these as part of their yard waste site. You can find a registered composting facility nearest you by searching the Illinois EPA Compost Facility listing.

Some communities are even organizing “pumpkin smash” events where residents can bring their pumpkins to get catapulted into a dumpster and then transported to a composting facility. In November 2021, University of Illinois Extension is partnering with SCARCE to have five pumpkin smash events in Northern Illinois. You can find details for those on our Extension webpage. Interested in organizing your own pumpkin smash event? These can be done throughout Illinois. For more information check out the SCARCE website. Don't trash it. Smash it!

Whatever option you choose, remember to avoid tossing fall décor in natural areas without permission, don't feed animals rotted pumpkins, and have a Happy Halloween!

Good Growing Tip of the Week: Pumpkin seeds can be saved for growing next year. Be warned! The pumpkin you grow next season will likely be different from what you grew this year. It can be a fun way to learn about pollination and plant genetics.

MEET THE AUTHOR
Chris Enroth is a horticulture educator with University of Illinois Extension, serving Henderson, McDonough, Knox, and Warren counties since 2012. Chris provides horticulture programming with an emphasis on the home gardener, landscape maintenance personnel, and commercial landscapers. Additional responsibilities include coordinating local county Master Gardener and Master Naturalist volunteers - providing their training, continuing education, advanced training, seasonal events, and organizing community outreach programs for horticulture and conservation assistance/education. In his spare time, Chris enjoys the outdoors, lounging in the garden among the flowers (weeds to most).