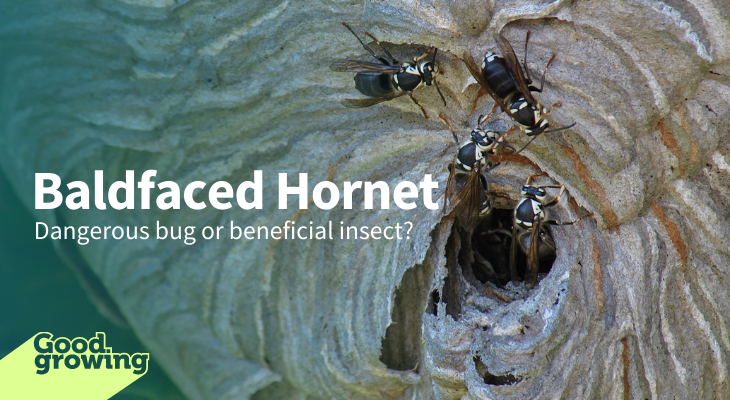 Winter may be an odd time to write about an insect that we only see during the warmer months of the year. Yet, I can’t help but marvel at the architecture of the baldfaced hornet’s nest, which has been revealed in the canopy of trees after leaf drop. This winter I have seen several baldfaced hornet nests in trees. The nest itself is a beautiful oblong structure, that is papery and grayish but if inspected closely it has waves of dark and light colors washing over its surface.

Incredible to think each of these nests begins with one individual, the queen! A single queen hatched the year before, overwinters in a protected space like leaf litter or nestled behind shaggy tree bark, even in an attic. Once spring arrives the queen sets about to find the perfect spot to build her colony. Nests are at least 3-feet off the ground, but often higher up in tree canopies. She may pick a large shrub, tall tree, under the eaves of a building, or other protected location.

Once a proper location is selected the queen must source her building material. Rotting wood offers cellulose, which she chews up and mixes with her saliva to create a papery material for nest construction. The initial shape of the bald-faced hornet nest in early spring has a rounded ball shape on top with a tube extending downward where she and her offspring will enter and leave from. The queen will lay eggs in newly built brood cells and her young will assume the duties of nest building, food collection, feeding, and guarding the nest. By the end of the summer season, her nest may contain over 300 offspring and takes on an oversized football shape.

As the summer turns to fall, the queen births the next generation of queens who will leave the nest, find their overwintering spot, and begin the process again next year. The colony itself dies at the first hard frost. The nest continues to provide shelter and food for other wildlife as birds will tear the nests apart over the winter consuming dead insects.

Many people live in fear of wasps and yellowjackets and a common question at the Extension office is, “How do you get rid of a bald-faced hornet nest?” My response is, "Do you need to?"

If you have an allergy to bee/wasp stings and the nest is close to a door or walkway, then hiring a pest control professional may be the way to go. As I mentioned, I am seeing baldfaced hornet nests everywhere this winter including one in a tree right over where I drop my kid off in front of the school. Yet, it was unnoticed until winter. We had a nest over our patio in the red maple tree. It was there all summer, but we had no idea. It wasn't until one chilly early fall morning I stepped out on the patio. I looked down on the concrete to find about a dozen baldfaced hornets warming up in the beams of light cast by the rising sun. Looking up I spotted the nest high up in the tree.

A nest out of the way is one thing, but what if it hanging by your front door or in the doghouse where conflict will be inevitable. See my note about hiring a professional to take care of it, but if you plan on DIYing this problem, here are some things to consider:

Hopefully, you won't need to use the steps outlined above, but there are instances where spraying must take place. Remember baldfaced hornets are not out to get us. Leave their nest alone and they leave us alone.

Good Growing Tip of the Week: Sometimes to get rid of a baldfaced hornet colony people will cut a limb and drop the nest into a trash bag. However, these insects’ jaws are strong enough to chew through the bag and this often results in stings. It is best to hire a pest control professional or leave them alone.

Chris Enroth is a horticulture educator with University of Illinois Extension, serving Henderson, McDonough, Knox, and Warren counties since 2012. Chris provides horticulture programming with an emphasis on the home gardener, landscape maintenance personnel, and commercial landscapers. Additional responsibilities include coordinating local county Master Gardener and Master Naturalist volunteers - providing their training, continuing education, advanced training, seasonal events, and organizing community outreach programs for horticulture and conservation assistance/education. In his spare time, Chris enjoys the outdoors, lounging in the garden among the flowers (weeds to most).