Sulfur deficiency in corn can lead to lower yields 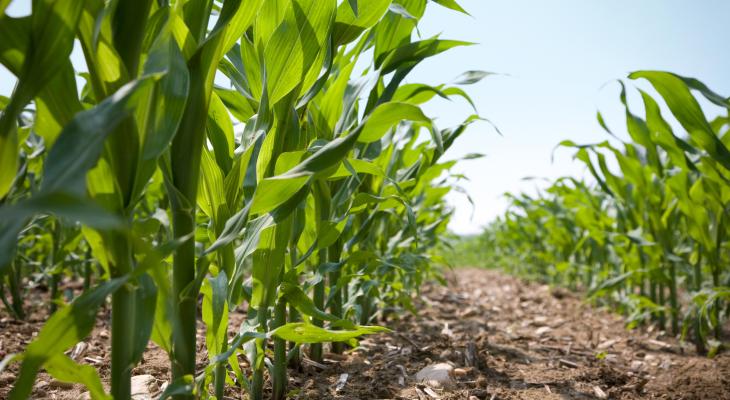 Depending on your soil test results; nitrogen, phosphorus, and potassium are nutrients we supply year after year to our corn crop; however, there is a nutrient we might be overlooking when making fertilizer applications. Sulfur is considered the fourth most important nutrient needed by plants. With a reduction in sulfur emissions from industrial and transportation sources, atmospheric sulfur depositions are much lower which has led to an increase in sulfur deficient corn. It is important to adequately supply crops with sulfur to maintain a high yielding crop.

Sulfur deficiency in the field is often seen as yellow striping with the veins remaining green. A quick search of “sulfur deficiency in corn” will produce some useful pictures for comparison. Sulfur is used by the plant for protein synthesis; it is also used to produce chlorophyll which is necessary for the plant to carry out photosynthesis. In other crops, it is used for nodule formation (soybeans) and quality of grain protein (wheat). Sulfur is not mobile in plant tissue which is often why we see deficiency symptoms in the youngest leaves.

Most sulfur in the soil is found in organic matter and crop residue; however, it is not readily available until converted to a soluble form of sulfate; this mineralization process is dependent on temperature, moisture, and other environmental factors. Sulfate in the soil is soluble and will move easily to the root with soil water; however, it will also move past the root zone with excessive rainfall or irrigation.

There are many different fertilizer options when it comes to supplying sulfur.  Manure is typically a good source of sulfur. Some readily available options include ammonium sulfate (AMS; 21% N and 24% S), gypsum (22% CaO and 17% S), potassium sulfate (50% K20 and 18% S), zinc sulfate (36.4% Zn and 24% S), elemental sulfur (90% S), MicroEssentials ((MESZ; 12% N, 40% P2O5, 10% S, and 1 Zn), (MES10; 12% N, 40% P2O5, and 10% S), or (MES15; 13% N, 33% P2O5, and 15% S)); as well as, other sources. Each of these sources vary in the type of sulfur; soluble vs. insoluble. The soluble source is readily available to plants to use; however, if fall applied, soluble sources can be leached beyond the root zone and unusable by the plant. Insoluble elemental sulfur must be converted to sulfate before plant roots can take up the nutrient which can take anywhere from weeks to years. Favorable environmental conditions and proper pH can help to speed up this conversion; particle size of elemental sulfur can also play a part in the process. Some fertilizer products are composed of both soluble and insoluble sulfur providing an immediate source; as well as, a later season source.

Katie Parker is the Local Foods and Small Farms Educator serving Adams, Brown, Hancock, Pike, and Schuyler counties. Katie provides programming with an emphasis on row crop production, soil fertility, composting, vegetable production, and ornamental horticulture. She is one of the authors of the Good Growing Blog and one of the Good Growing Podcast hosts. Katie received her bachelor’s degree in agriculture science from Western Illinois University and earned her master’s degree in crop science from University of Illinois.