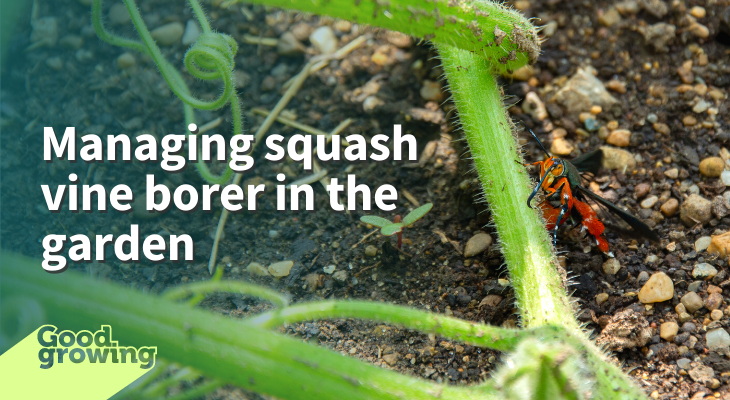 There are a variety of insects that will feed on squash. One of the more troublesome, and potentially devastating, is the squash vine borer. If you've grown squash and had a runner or two start wilting, there's a good chance you've had an encounter with squash vine borer. 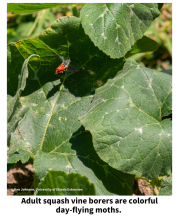 Squash vine borers (Melittia cucurbitae) will feed on both summer and winter squash and pumpkins as caterpillars. The adult moths are 5/8- to 1-inch long and colorful. Their abdomens are usually orange with black dots. Their hind legs are orange and black and hairy. Their front wings are greenish-black, while the hind wings are colorless with dark veins.

The adults fly during the day, often darting around in a zig-zag pattern. Because they fly during the day, they are commonly misidentified as wasps. The adults will emerge from mid-June to early July and lay eggs, primarily near the base of stems, but they can be found on other parts of the plant (elsewhere on stems and petioles).

After the eggs are laid, they will start to hatch in about 10-14 days. The larvae (caterpillars) will bore into the stems and begin to feed. When they enter the plant, they will leave a small hole, and as they feed, they will push sawdust-like frass (insect excrement/poop) out of the hole, which will accumulate over time. While the larvae are most commonly found near the base of the plant, they can be found throughout the plant and even in fruit, particularly later in the season.

As the caterpillars feed, they will tunnel through the stems. This will often cause wilting of vines, especially during the heat of the day. As feeding continues, the vines the caterpillars are feeding on may eventually die. The larvae will grow to be about 1" and have a whitish body and brown head. After feeding for 4-6 weeks, they will emerge and burrow into the ground, where they will eventually pupate. In southern Illinois, there can be two generations. 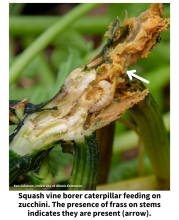 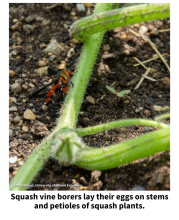 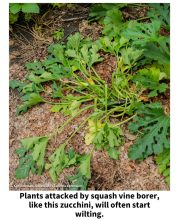 Good Growing Tip of the Week: Good sanitation can help reduce squash vine borer populations. When you are done with your squash and pumpkins in the fall, remove the plants and shred or otherwise destroy them. This will help get rid of any caterpillars that may still be present in the vines.