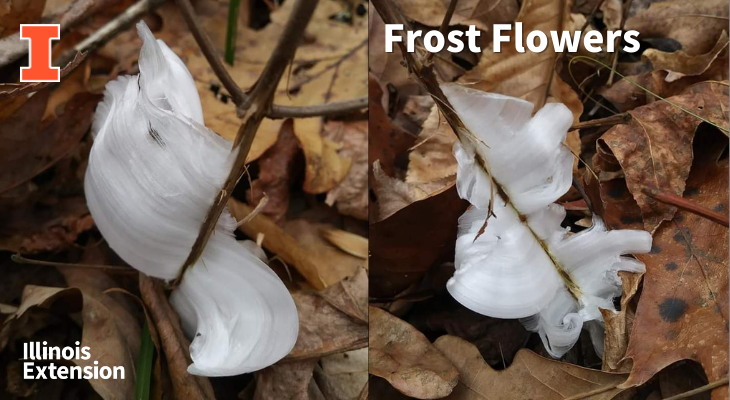 Late fall and early winter provide an opportunity for a rare glimpse at a fascinating phenomenon, if you are willing to get up early!  Frost flowers, also called ice flowers, are thin, often undulating ribbons of ice that form at the base of certain plants.  This happens when the air temperature drops below freezing, but the soil temperature remains relatively warm.  Frost flowers usually appear in late fall as the temperatures drop below freezing at night but can also form in spring sometimes or in warmer stretches of winter.

As the sun rises and the shadows retreat, the direct rays hitting these fragile frost flowers will rapidly melt the frozen spectacle away.  On most days, it is the early risers, such as the morning hikers or bow hunters, that get rewarded with the privilege of seeing these flowers fully formed.

While there are other plants that can also form frost flowers, in Illinois two species, wild dittany (Cunila origanoides) and white crownbeard (Verbesina virginica), are the common culprits.

Frost flowers are formed through a process called ice segregation.  Water moves through a porous medium, such as a plant stem, and freezes to the outside of the stem when it hit the freezing air.  Since the ground is not frozen, it keeps the water in the plant in a liquid state where it can continue to move.  As additional water moves through the medium, it continues to freeze, adding to the ice layer and pushing it outward.  When the water movement is restricted to small fissures in the plant stem, the resulting ice forms the ribbons or sheets that we call frost flowers!  Since the ice ribbons are typically very thin, they will melt easily in above-freezing air temperatures or even radiating heat from the sunshine.

While it is not clearly understood why so few species can form frost flowers, it is likely due to the specific size of the pore spaces on the stem or the water permeability.  There is still a lot more to learn, even about our Illinois native plants!

To learn more about the science behind frost flowers, see the great webpage on them from Dr. James Carter, Professor Emeritus at Illinois State University or this article in American Scientist.

The Missouri Department of Conservation also has some basic information on frost flowers on their website.

Chris Evans is an Extension Forestry and Research Specialist and the Interim State Coordinator for the Master Naturalist Program.  He has been with the University for over five years.  Chris has a BS in Wildlife Biology from Murray State University and a MS in Forest Biology from Iowa State University.  He is interested in forest health and management, native plant restoration, and invasive species management.