Reason for the Rime 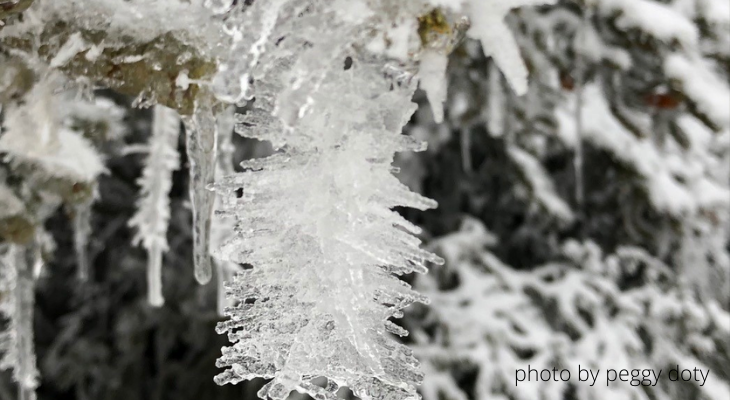 I distinctly remember being in a car with my parents one early morning.  My father, an agronomist, knew endless amounts of nature information. He knew more than just everything about soil and creating high bushel numbers for our local farmers. He knew secrets, at least that is what I believed, and he often described the simple wonders of nature to me from the front seat.

This particular morning, I am recalling, was the most perfect winter day I had ever seen in my whole 9 years of existence.  Every tree and structure were flocked in this incredible sparkling blanket from top to bottom.  The sun was incredibly bright, and I remember him telling me to look at everything because this was a hoar frost and by mid-morning it would all be gone.  We did not take pictures of everything we saw back in the early 70’s.  We spent our time simply witnessing the natural magic of the seasons. We got carried away with just our observations and then, like our blog on storytelling, we would share it verbally with each other.

This month in northern Illinois we experienced days of continuous hoar frost. Hoar frost is not a rare event but for it not to melt the same day it appeared, is a gift. Hoary simply means white or gray as in old age. So, when people started throwing around the word rime ice, I had to look it up.  My father never spoke of rime ice. Maybe it never occurred when we were together, or maybe he was unaware of this rime thing.

I started digging and reading many definitions, most simple but confusing. It didn’t help when people were telling me about rime and clearly had no idea what they were talking about. They could not explain it beyond reciting a description they had recently read.  The National Weather Service defines rime ice (not a frost) as “An opaque coating of tiny, white, granular ice particles caused by the rapid freezing of supercooled water droplets on impact with an object.” The difference, often not stated, is the hoar frost can accumulate on below freezing surfaces even when the air temperature is degrees above freezing.

My dad and I would have processed this information together and come to the realization the hoar frost created the perfect supercooled base layer. The hoar frost, and the perfect weather conditions, were the likely reasons for the rime ice this year. Dad also said whenever I come up with a potential answer to a question, it was right until someone proved it not to be, and that is when we learn more.