Feral Swine: Potentially the most threatening invasive yet 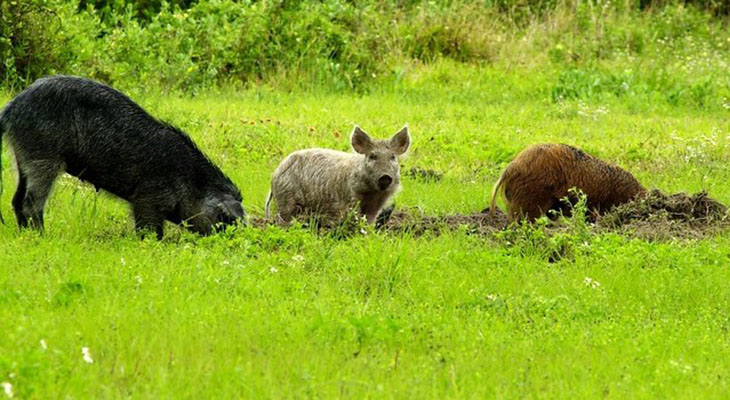 Feral swine are also known as feral hogs, wild boar, wild pigs, or razorbacks and are defined by IL Admin Code Part 700 as populations or individual swine that are unrestrained and have adapted to living in a wild or free-forming environment. 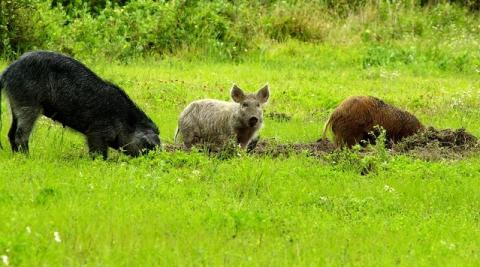 Let’s back up, pigs (Sus scrofa) are not even native to the western hemisphere so how in the world did we end up with one of the most threatening invasive vertebrates to date? Enter Christopher Columbus and his second voyage to our side of the globe.

Chris brought eight domesticated pigs with him to the Canary Islands, somewhere around the 1490s. It was Queen Isabella’s idea and I am sure it seemed like a nice gift. Because pigs eat anything, they were easier to transport by ship than a fresh fruit basket. Later it was Hernando de Soto who took 13 pigs to Tampa Bay, Florida in 1539. Hernando has been called the “father of the pork industry.” (A History of Pigs in America, by Mick Van, The Austin Chronicle)

This is all great except pigs are escape artists and many adapted to a feral existence. Later, in the 1800s, sport hunters brought pure Eurasian wild boar to America for hunting. When some of the boars survived, they bred with the feral pigs creating a third lineage of feral swine.

There are three groups of pigs in the U.S. today:

Does Illinois have feral swine?

By the 1990s, we had a few individuals documented in southern Illinois counties. By 2011, the USDA had confirmed feral swine breeding populations in Fulton, Fayette, and Marion counties. In 2017 a small isolated population were discovered in Pike County in western Illinois which were created by free-range pigs, this should sound familiar. By 2018 feral swine were found in more than 40 states and not just in the South.

Currently, most feral swine that have been removed from Illinois were those set free from fencing or those brought in by trailer for sport hunting. Feral swine hunting has been glorified and made to look very exciting on the internet, so much so that people are going to other states to buy swine, trailer them back to Illinois and releasing them.

Why should we be concerned?

Feral swine are considered extreme generalists which means they can live anywhere if there is open water. As opportunistic omnivores, they will eat virtually anything they come across including all parts of any plants, amphibians, reptiles, birds, eggs, and even vulnerable mammals. This non-picky behavior can create food shortages for native species in the same area as the swine.

Their rooting while feeding behavior in which they use their snouts to uproot vegetation and earth in search of food (as well as wallowing) causes soil erosion and that allows increases in sediment which in turn affects water quality. Rooting behavior also turns the soil which increases growth of invasive plant species because many tend to thrive in these disturbed environments.

Feral swine have the greatest reproduction rate potential of any large mammal in the world. Under ideal conditions, adult sows can breed up to twice a year with 5-10 piglets per litter. Juveniles may begin reproducing at 6-8 months of age. At these rates, 60% to 70% of the population must be removed annually just to keep the population from increasing and to remain stable. This is considered wildlife population management but let’s be clear, we do not want them at all.

These animals are causing billions of dollars in damages to agriculture by tearing up fields and spreading disease to livestock. The potential for disease transmission from feral to commercial swine is a serious concern for our Illinois pork producers. They also have the potential to deplete habitat biodiversity with the added concern of vulnerable ecological areas being destroyed overnight.

In addition, there is an important disease element to consider. According to the USDA, feral swine are highly mobile and can carry more than 30 different types of diseases and 30 different parasites. Many of these are not host specific and could potentially harm, wildlife, livestock, pets, and even humans. Diseases of concern that could spill over to people include leptospirosis, salmonella, trichinosis, and brucellosis.

How can you help?

If you farm or spend time hiking natural spaces in Illinois you can go online and look for feral swine signs including wallows, rubs, and rooting. If you see any of the signs you can contact the USDA immediately. If you find any feral swine, do not shoot at them as this causes them to permanently spread out and start multiple new groups making it harder to control the overall population.

Feral swine are one of the most serious, if not the most, invasive situation we are currently dealing with based on the agricultural and environmental threat. They have the ability to shatter the world food supply and impact large regions of our environment. We cannot let nature take its course when it comes to feral swine.

Naturalist News is a blog by University of Illinois Extension Master Naturalist staff and volunteers who bring you stories highlighting the individuals, places, wildlife and plants that make this state amazing. Join us each week to learn something new, be inspired and become connected to your own community by recognizing the amazing ways we are all intertwined. Want to get notified when new Naturalist News posts are available? SIGN UP HERE!