The robins have returned, but did they ever leave? 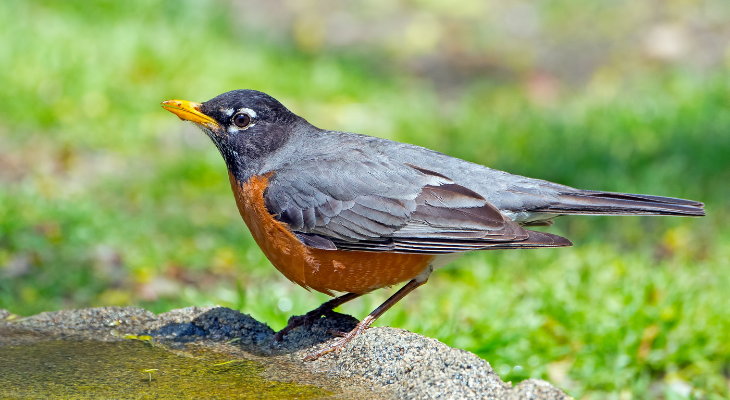 Spring has sprung! What nature-lover doesn't like to engage in a friendly little competition with their friends and family each year over who sees the first robin?

Bird lovers often keep detailed notes year to year comparing when the first robin was seen and hypothesize why they were early or late. I remember one cold, snowy New Year's Day in the concrete and limestone of downtown Joliet, I was shocked to see crabapple trees loaded with robins munching away on the frosty fruits.

The robin returning has long been spring's calling card for Illinoisans. But do our local robins migrate? Their Latin name implies that they do -Turdus migratorius. Research has shown many robins are closer than you may think all winter long.

Robins feed on invertebrates and fruit. This is the key to their winter behavior. Robins follow the food.

We may think that the robins have migrated to warmer weather when we no longer see them in our backyards. But these sturdy birds are still around in areas where berries are plentiful while their other main food, invertebrates, are unavailable under the frozen ground.

The Journey North American Robin Tracking Project found that robins don't migrate in the typical north to south pattern to seek warmer weather, but rather have nomadic patterns following food sources. If local berry sources are depleted, they will move to the nearest area of bountiful food.

Birds of a feather flock together

Contrary to their territorial behaviors in the spring and summer, robins gather in large flocks in fall and winter. Flocks offer several benefits — greater numbers to spot and warn for predators as well as the ability to source food. And unlike their more terrestrial habits in the breeding season, robins spend fall and winter in trees and woodlands near sources of open water.

Local birds have an advantage when it comes to breeding season. They expend far less energy and time returning to their breeding grounds in spring where robins once again follow the food and this time to their favorite invertebrate, the earthworm. Robins start to reappear in backyards when temperatures start to climb above 37°F. As the soil softens, earthworms begin their own "migration" up toward the warming soil's top few inches and within the grasp of a hungry robin's beak.

More about the American Robin

Robins are one of the most common songbirds found in all 50 states. They are equally at home in a suburban backyard as they are in a forest, field, golf course, or tundra. Robins are the largest member of the thrush family. Both male and female robins measure from 8" to 11".

Only females have a brood patch — an area of skin that is featherless during brooding season, rich in blood vessels, that aids in transferring heat to the incubating eggs and newly hatched young.

Robins also have a full molt when they lose their feathers, once a year between late July and October.

Males are the first to return to the breeding area in spring and can be quite territorial. Master Naturalist volunteers are often asked about this odd behavior as homeowners report the male robins hitting their windows as they see their reflection as competition. Homeowners can put up some distracting image to block the reflection, but the bird often just moves to another window. Fortunately, once the birds select a mate, this behavior usually resolves on its own.

Females determine the nest site and they build it from the inside out creating a cuplike inner structure of mud and grasses using the wrist of their wing to form the cup. Mud is essential to this process and if no mud is available, nest building may be delayed. The rest of the nest can be a wide assortment of natural materials and human refuse, such as candy wrappers, twigs, and animal hair.

Robins lay a clutch of four eggs, one per day, in that unmistakable robins egg blue. Fledging hatch in 13 to 15 days. Newborn robins are helpless, featherless, and pink but they soon grow their first feathers. Young birds leave the nest in two weeks before they can fly, much to the distress of human finders, but the parents are still caring for them and they should be left alone.

Robins can have one to three broods per year and build a new nest for each. Robins often return to the same area, yard, even tree annually to nest. In Northern Illinois, a few Will County Master Naturalists report having the same artificial twig wreath host a robin's nest year after year.

Late this coming fall, I am going to make a point to seek out sites of local winter robin habitats with berry-producing trees and shrubs with access to open water. I will follow the robins as they follow the food.

MEET THE AUTHOR
Nancy Kuhajda is the Agriculture and Natural Resources Program Coordinator for the Master Naturalist, Master Gardener and Master Composter Programs in Will and Grundy Counties in Northeastern Illinois. Nancy has a bachelor's degree from the University of Illinois at Urbana Champaign and has Graduate Certificates in Crop Science and Horticulture. Nancy also writes a weekly column for a local Joliet paper on nature and gardening topics. Nancy's passion is to bring understanding of the natural world to the community at large but particularly to the underserved urban youth, special needs, and elderly in congregate housing in the community.