Prescribed fire as a management tool 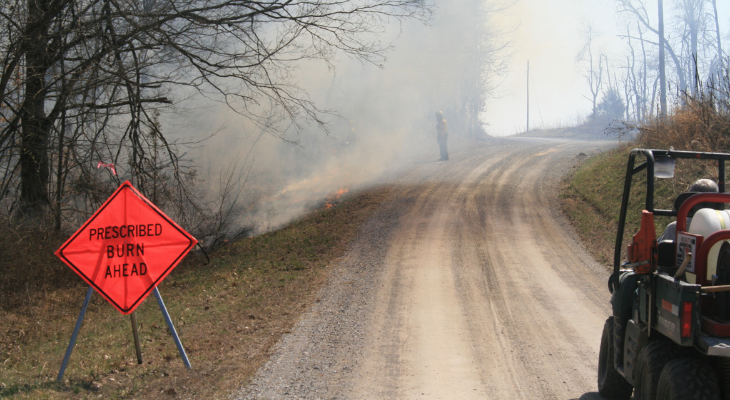 As we transition to fall here in Illinois, you may see smoke in the air or see the grasslands or forests burning.  These could be signs of a prescribed fire being conducted intentionally to manage our natural ecosystems.  The use of prescribed fire is increasing throughout Illinois.  To understand why fire is being used as a management tool, let’s take a look at the role fire has played in the development of ecosystems in Illinois.

Over the last 10,000 to 12,000 years, fire has been an integral component on the Illinois landscape. Prairies, savannas, and most forests in Illinois historically burned quite frequently.  Fire is a type of disturbance that can have a great influence on the vegetation and wildlife, favoring certain species while discouraging others.

Native Americans and early European settlers both used fire extensively as a management tool. However, in the early 1900s the intentional use of burning fell out of favor.  Landowners stopped using fire as a management tool. Fire towers were erected to spot fires so that they could be extinguished as quickly as possible.

This active fire suppression changed the landscape. Open ecosystems, such as prairies, glades, barrens, and savannas, started closing in as woody plants encroached. Maples, beech, basswood, and other fire-intolerant tree species were no longer confined to bottomlands, toe slopes, coves, and other areas that didn’t usually burn. Instead, they moved into upland forests which reduced light to the forest floor, limiting the understory plants that were able to grow there and restricting oak seedlings from establishing. The results of this fire suppression are less diverse ecosystems with sun-loving native plants being confined to open pockets, forest edges, roadsides, and other areas where some type of disturbance was maintained. 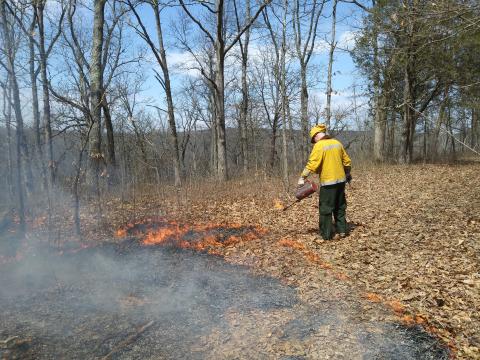 Natural resource managers are now bringing fire back to the landscape as a way to restore natural ecosystems and promote native species and wildlife. This intentional use of fire as a management tool is called prescribed burning or prescribed fire. Today, prescribed fire is a widely accepted and often used management technique.

It is important to distinguish prescribed fires from the wildfires that are in the news so much lately.  Wildfires were not planned and burn out of control. Prescribed burning is an intentional application of fire through careful planning.  A burn plan is developed for each burn unit that details the weather conditions, such as humidity and wind speed, needed for a safe and effective burn. The plan also includes the number of crew needed to conduct the burn and the specifics of the burn and techniques that should be used.

Prescribed burns typically have firebreaks installed ahead of time. A firebreak is simply an area with the fuels removed or rendered non-flammable. For example, leaves in a forest may be raked or blown, leaving bare dirt. Grass in a prairie may be mowed low, disked, or even wet-down with water. These breaks surround the burn unit and are used to reduce the chance the fire escapes and burns in unintended areas. Wind speed and direction, topography, adjacent vegetation, fuel moisture, and available equipment and staffing are all taken into account when deciding if and how to implement a prescribed fire. Crew members have well-defined roles and the burn is guided by a burn boss that has the necessary training and experience.

Prescribed fire can knock back woody encroachment into prairies and savannas, help control some invasive species, stimulate native species, reduce leaf litter buildup in forests, check the spread of fire-intolerant species such as maple, and increase species diversity. Spring and fall are the most common times of the year for prescribed fire, though growing season burns are becoming more common as well.

Prescribed fire can also be used to reduce the risk of damaging wildfires. By burning when conditions are not extreme, build-ups of fuels can be reduced in a safe manner. This is one of the tactics currently being used in the western United States to reduce future wildfire risk. Fuel reduction burning is also being used in Illinois at times, especially in areas where storm damage or logging has led to a significant buildup of woody debris in forests.

The use of prescribed fire is increasing in Illinois on both private and public lands, but much more is still needed to restore and maintain healthy ecosystems. The 2016 Illinois Fire Needs Assessment produced by the Illinois Prescribed Fire Council determined that more acres need to burn in Illinois at a much higher frequency. To reach management targets, over 200,000 acres should be burned each year in Illinois.

MEET THE AUTHOR
Chris Evans is an Extension forestry and research specialist and interim state coordinator for the Extension Master Naturalist Program. He has been with the Extension for over five years. Chris has a bachelor’s degree in wildlife biology from Murray State University and a master’s degree in forest biology from Iowa State University. He is interested in forest health and management, native plant restoration, and invasive species management.