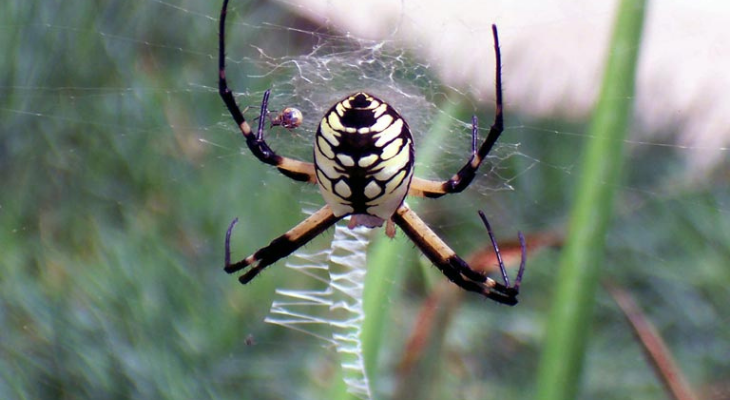 There's a social media meme that says, “There is no better karate instructor than a spider web in the face.”

I don’t know about the karate skills, but nothing makes you swat, rub and dance quite like walking into a web. Just imagine how an insect feels. Growing up in the woods, I have walked through my fair share of webs and while I too, practice my karate skills when I do, I have grown to appreciate these fascinating creatures and their webs.

While they go by many names, especially when one has walked through a web, the creator of those webs is probably an orb weaver spider, from the families Araneidea and Tetragnathidae. They are the most common builders of spiral-shaped webs.

It can be said that no other “bug” can generate as much fear as spiders do, but fall is a great time to see them in all their glory. Remember, spiders remove numerous pests that we would have to deal with, otherwise. And orb weavers are generally not aggressive spiders. If disturbed they are more likely to drop and run than bite. Of course, if they are in danger of getting squished, all bets are off. So, now is a time to look carefully and marvel at the beauty of the orb weaver spiders and their magnificent webs.

Tetragnathidae are a super common group of orb weavers found in Illinois and Araneidae are the most physically diverse group of orb weavers. The shape of the abdomen of Araneidae orb weavers can vary widely from smooth to spiny or very irregular. But in general, they have a large abdomen that overlaps a bit with the cephalothorax. Found in gardens, fields, and forests, most orb weavers appear in spring, but we may notice them more in the fall as they and their webs get bigger.

Nocturnal orb weavers tend to be brown or gray while the diurnal orb weavers often are brightly colored as a warning to birds that they may not be a tasty treat. Yellow, the color of caution, black and white are common colors for these spiders. Females are commonly observed sitting in the center of their webs. Males may or may not build their own webs as they are generally on the hunt for a mate.

And most prefer spinning their webs between two sturdy supports, like doorways, windows, or plant stems. If an orb weaver has spun a web in an unwanted location, like your front door, gently shoo the spider away and then remove the web. After a few times, the spider will get the message and move its web. Please don’t commit arachnicide.

But what a structural engineering marvel those webs are. Spider silk is amazing and surprisingly strong. Produced from protein in the spider’s spinnerets, it may be used for transportation, shelter, courtship, and of course, numerous inventive ways to capture prey.

Scientists are still researching the “whys and benefits” of web-spinning. Some spiders can even produce different types of silk depending upon the use. A common orb web may contain at least four different types of silk. It is theorized that each adds its own unique characteristics like flexibility, strength, and stickiness

For the orb weavers, a non-sticky silk is used in the radial threads of the web, think bike spokes coming out of a center spot. The same silk is also used to “frame the web”. Think the actual bicycle tire, which may act to stabilize the web. All the other spiral threads are made of the sticky silk which clings to us when we walk through a web and is what captures the unsuspecting insect.

One structural aspect that a species of spider uses is called a stabilimentum. This is a zig-zag pattern of dense silk that is oriented downward from the center of the web. Scientists have shown the stabilimentum displays ultraviolet fluorescence like some flowers which display ultraviolet patterns as well. While this isn’t well understood yet, one theory is it acts as a lure to the spider’s unsuspecting prey. Many insects see ultraviolet light and they use these patterns to find food. One study showed that pollinating species were especially vulnerable to this technique.

When an insect gets tangled in a web, the spider quickly runs to the insect and starts wrapping it in a dense shroud of silk. It then sinks its fangs (chelicerae plural; chelicera singular) into the insect. The venom contains both neurotoxins, which halts the insect's struggles, and necrotoxins, which are digestive enzymes that dissolve the insect’s innards. The spider then takes the bagged lunch back toward the center of the net and attaches it to the web to wait while the enzymes do their work. Later, it will jab their chelicerae into the package and enjoy an insect “slurpee.”

If you want to learn more about spiders, listen to the Good Growing podcast with special guest, entomologist, Dr. Kacie Athey, for more interesting facts.

MEET THE AUTHOR
Wendy Ferguson coordinates the Master Gardener and Master Naturalist programs in Henderson, Knox, McDonough and Warren Counties. Wendy earned a BS in Environmental Studies from Eureka College and a MS in Environmental Studies with an emphasis on writing and communication from Green Mountain College. She is interested in facilitating a deeper connection to place for community members through nature journaling and education. She is also an author for the Naturalist Notebook blog.

ABOUT THE BLOG
Naturalist News is a blog by University of Illinois Extension Master Naturalist staff and volunteers who bring you stories highlighting the individuals, places, wildlife and plants that make this state amazing. Join us each week to learn something new, be inspired and become connected to your own community by recognizing the amazing ways we are all intertwined.

Want to get notified when new Naturalist News posts are available? SIGN UP HERE.