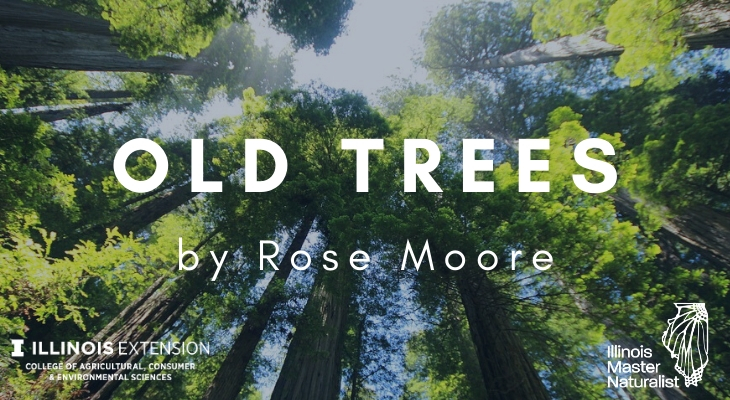 It all started a month ago when I was working on a painting of Giant Sequoias after a trip I took recently to Yosemite National Park. In gathering information about these trees I discovered scientists believe the oldest specimen alive today is about 3,500 years old. Those that were logged in the past were recorded at over 5,000 years old. They are among the oldest living things on earth.  Suddenly, my interest was sparked in finding out how old are the trees on my property.

I have been aware of the fact that some of the oaks here are pretty big but I never gave it a second thought until now.  I decided that I would measure one of the biggest for a start. A Northern Red Oak on the edge of the eastern ravine. First I had to find out how to do it so I turned to the internet for help. Many sites have formulas for determining the ages of trees but all of them start with circumference divided by pi to get the diameter of the tree. The Morton Arboretum website has a chart to follow and others have formulas to multiply diameter times known growth rates for different species. So with my tape measure in hand I set out to measure this tree.  The process involves starting at a height 4.5 feet above the ground and measuring around the trunk at that point to get circumference.

To my surprise I discovered my tape measure wasn't big enough. So I carefully used a piece of string then measured that to get my information.  Circumference was 13 feet 8 inches. Back inside I calculated according to the prescribed directions and came up with the diameter of 52 inches. I furiously did the calculations over and over and came up with the same results.  I looked at the charts and figured again. Could it be? This tree was possibly 210 years old?!

Some charts suggested it could be older based on new information gathered in recent years about large trees in Illinois.  However, all these different ways of calculating are estimates. Of course a better idea could be obtained from the tree's rings but this tree is still very much alive and I would like to keep it that way.

To say this discovery blew me away is an understatement! I decided then to look at my tree's age in relation to the local history. Over several days I read through historical records of my township that I could find and also some documents given to me by local residents. It began to make sense then as I discovered that this particular property remained timber land well into the early 1900's.

Then what really hit home was when I linked my tree to the history of the United States. The oak was perhaps emerging from its acorn in 1810.  The United States was in its infancy and James

Madison was the 4th president. Illinois was not a state, just a territory. This little sapling may have been passed by Native Americans who lived and hunted on these lands. This land was described by the first European settlers as a dense timbered area of high quality along the branches of the Henderson River (Creek). So it was a little shaver among its older relatives in a densely wooded area and lucky that it was growing in a hard to reach place and saved from the ax in later years.

Since this discovery I can't help but notice all the large trees on this property.  My goal is to do a survey of all the species and their ages. Now I have begun to measure the largest of the Sugar Maples.  The information I have gathered so far has astounded me but that is a story for another day.