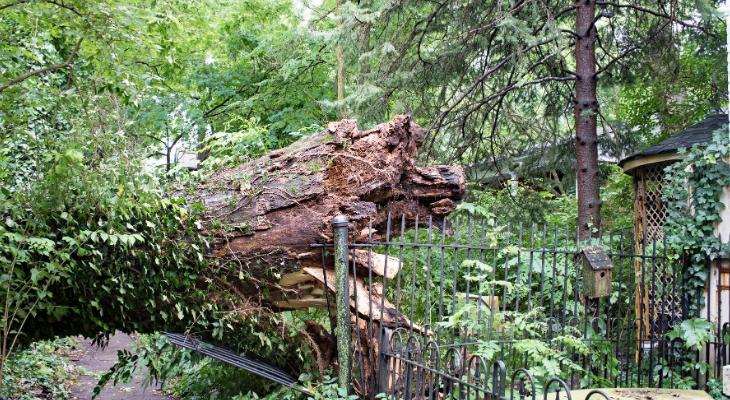 Strong winds and heavy rains have caused damage to our larger, older shade trees. Wind and rain together provide the “right ingredients” to bring down limbs, especially those that have had structural issues like decay or poor crotch angles, creating included bark which weakens the crotch physically. Bad crotch angles will allow the wind to tear out one of the limbs, usually the smaller or weaker one. The rain just adds many pounds of weight, making the job of the wind easier. Broken branches throughout the canopy is better than having lost a large limb, permanently disfiguring the tree.

Branches broken in the canopy need to be pruned properly to prevent future decay. This also can mean that the remaining portions of the canopy will need to be thinned to maintain plant health. Large branches that have broken out of the trunk pose a more difficult repair and recovery. Most often, the wood is torn deep into the heartwood, this leaves a deep wound that is slow to heal, and often never does, even after many years. The edges of the wound need to be smoothed or rounded over to allow callous tissue to grow over the wounded area. Callous tissue grows at about 1/2 inch a year, so you can see why it can take so long to heal. Wound dressings are no longer recommended, as research has shown no measurable help in wound healing.

A typical shade tree grows with a “central leader,” meaning you should be able to see one continuous trunk from the ground up through the canopy. Co-dominate leaders occur when two trunks try to become the leader at the same time. This creates that poor crotch angle, weakening those branches so a good wind can break one out. This is some of the worst kind of damage to attempt to repair. Prune the damaged area as soon as you can using proper cuts, leaving the smallest wounds possible and they will heal more quickly.