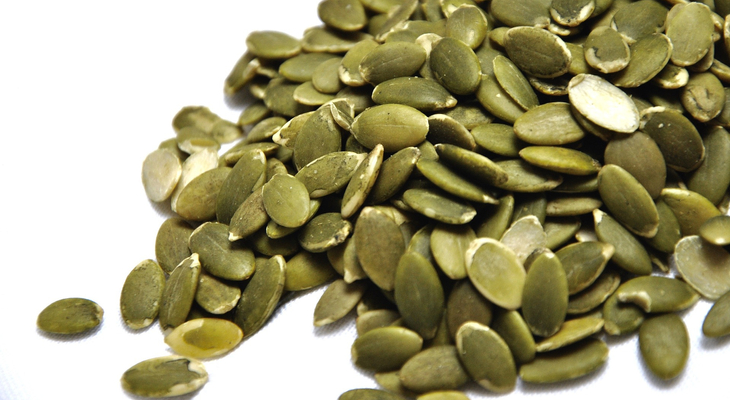 I recently ordered some pumpkin seeds online, but when I opened up the package, I realized that they were not the pumpkin seeds I had in mind. I was expecting to see cream-colored, oval-shaped seeds, like the ones you’d dig out of a jack-o-lantern, but instead I received greenish, small seeds without a cream-colored hull. They resembled a sunflower seed only a tad bigger. It dawned on me that I had actually ordered pepitas.

All pepitas are pumpkin seeds, but that doesn’t mean that all pumpkin seeds are pepitas! Pepitas are a type of pumpkin seed from certain varieties of pumpkin, such as Lady Godiva or the Naked Bear (cool names, huh?)  These pumpkins produce a “naked seed,” which is a hulled seed that is lighter and nuttier than a traditional pumpkin seed. It’s important to note that if you try to hull your jack-o-lantern pumpkins seeds, you will not find a pepita inside!

Pepitas are more versatile in the kitchen than traditional pumpkin seeds since they’re not as tough. They aren’t just for garnishing butternut squash soup. Use them to make pesto, as a crust for meat or fish, as a topping on muffins, mixed into granola, baked into focaccia bread or made into brittle. Pepitas make a great snack all on their own. They’re full of heart-healthy fats, protein, fiber and iron. Store in an airtight container for up to 3 months. If storing for longer, refrigerate or freeze for up to 12 months. Make the mistake I did: order pepitas instead of traditional pumpkin seeds!

Preheat oven to 375°F. Spray a baking dish with non-stick cooking spray. In a gallon-size sealable plastic bag, add the spices, panko and pepitas; seal and shake to combine. Place eggs in a shallow dish. Dip tilapia filets in egg and place in bag with breading mixture; seal and shake to evenly coat fish. Place fish on prepared baking dish. Bake for 10-12 minutes or until fish reaches minimum internal temperature of 145°F.