The Wisdom of Elderberries 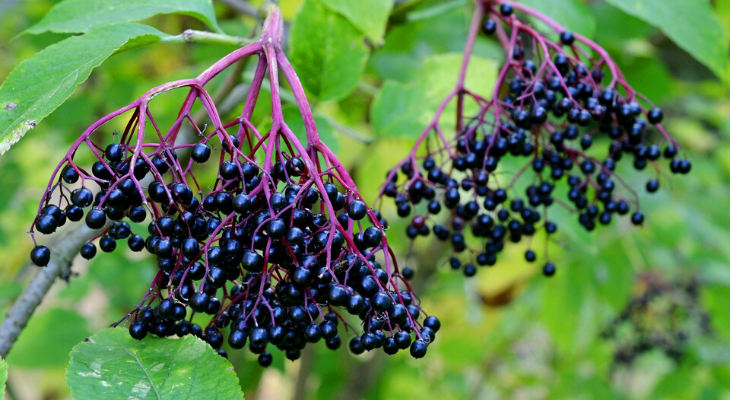 Elderberries have been used in folk medicine for centuries as a remedy for influenza and colds, but only recently have they become popular in the United States. The common elderberry (Sambucus var. canadensis) is a beautiful native shrub with white flowers and dark purple berries. It can be planted as a tall hedge in a beautifully decorated lawn, but can also be found growing wild in Illinois along roadsides. Black elderberry (Sambucus nigra) is native to Europe and is generally the berry used in elderberry products found on store shelves.

Elderberry popularity has skyrocketed, largely due to marketing strategies that tout its immune-supporting properties. However, the evidence is still limited, as only a handful of studies have been conducted on humans. In terms of nutrition, elderberries are at the top of their class. One cup of raw elderberries has approximately 100 calories and 10 grams of dietary fiber, which is more than a quarter of most people’s daily fiber needs. Of course, what really sets them apart from other foods is their high content of disease-fighting phytonutrients, such as anthocyanins, flavonoids and antioxidants.

Care must be determined when working with elderberries. Elderberry shrubs contain cyanogenic glucosides, which release cyanide, a potentially deadly chemical, found primarily in the leaves, stems and roots, therefore making these parts inedible. Ripe elderberries are sweet and juicy, though seedy, and are generally cooked for best flavor. Use elderberries in a variety of foods, such as jams and jellies, pies and cobblers, juice, tea, syrup and wine. Fresh elderberries are highly perishable, and thus can’t be found in grocery stores. Most elderberries are dried and can be purchased online.

Wash hands with soap and water. Combine water, elderberries, ginger, cloves and cinnamon stick in a medium saucepan. Bring to a boil; cover and reduce heat to a simmer for one hour, or until liquid is reduced by half. Remove from heat; allow to cool. Pour through a strainer into a bowl. Stir in honey. Pour into a jar or container with lid. Store in refrigerator for up to two weeks. Use in smoothies, hot tea, pancakes, etc.