The best monster movies get their ideas from nature 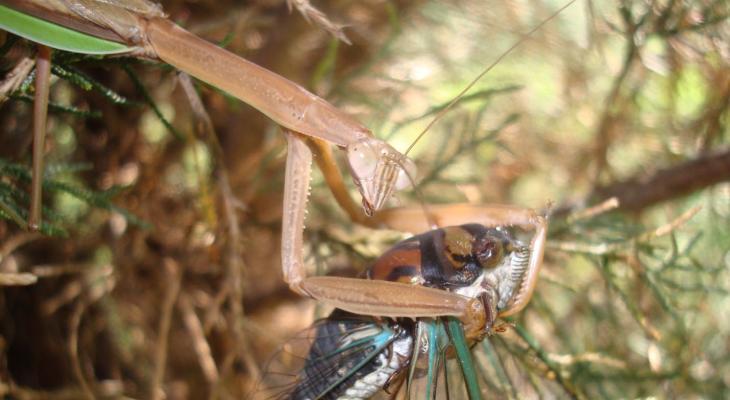 I’m pretty sure I know where writers get a lot of their ideas for monster movies…from the insect world.
Case in point. One minute I’m happy the monarch butterfly and eastern black swallowtail larvae are munching away on the larval food plants I especially planted for them, then next they are part of a buffet for the local wasp population. Walk by a sweet fennel or milkweed of any kind and you will see various wasps flying around looking for caterpillar prey. I understand it is part of the overall food web, but I don’t have to like it. In reality, wasps are considered beneficial insects because they prey on other insects, including insect pests of the shrubs, trees and flowers in the garden.

Too bad “some” wasp species wake up every day on the wrong side of the bed. I very recently had a go round with paper wasps, which are aggressive. It started out with a momentary confusion on my part as to why or what was causing such serious pain in my hand. All I was doing was tossing a handful of weeds into my basket?? Then I saw her, coming in for another attack…and all her sisters boiling out of a nearby overturned flower pot to back her up. Time to run, and I did!

According to the Illinois Natural History Survey, most people will never encounter a walking stick, not only because of their rather unique camouflage, but because of their tendency to be active only at night. So I consider myself lucky, now, to have had one get tangled in my hair. At first I thought I had a stick in my hair, but when I sensed self-propulsion on its part, I ran for my husband’s help…to photograph it…after a short period of panic. I can only assume it lost its grip while resting in my wild cherry tree, since these leaf-feeding forest dweller prefer hard woods like wild cherry, oak and black locust.

Another time, I remember an awful noise coming out of a juniper; a sound I just could not make sense of. As I crept up to the bush, I was worried what I would find. I slowly parted the bush, but at first didn’t see anything…most importantly, nothing jumped out at me…literally. But the noise continued so I homed in on it, and I finally spied what was making such a racket. A large, non-native Chinese praying mantis had in its clutches a cicada, and the cicada was buzzing for all it was worth, trying to escape the munching mantis.

Main photo: A Chinese praying mantis with a cicada held firmly in its front legs

Welcome to My Jungle