URBANA, Ill. – Vermicomposting or vermiculture, which is also known as worm farming, is the practice of keeping worms to produce worm castings or vermicompost. Vermicomposting is a natural process where worms digest organic matter and produce a waste product that is high in plant-available nutrients, beneficial microbes, and organic matter.

“Gardeners have been using vermicompost to improve soil and plant health for decades which is why it’s known as black gold,” says Austin Little, University of Illinois Extension horticulture educator. 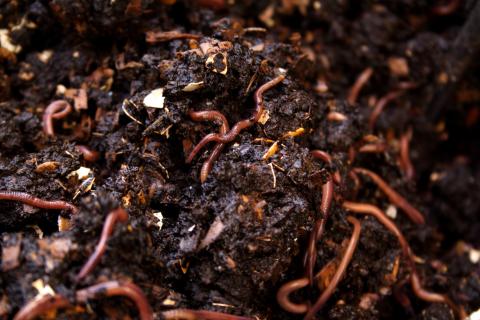 Worm farmers often prefer to keep their worm bins outdoors or in an outbuilding. This is fine during the warm season as long as they are kept out of direct sunlight.

“However, in the months of winter, extra measures are needed to ensure the current worm population’s survival,” Little says.

Larger compost bins will maintain more of their internal heat and will give a deeper space for worms to migrate into if it gets a little too cold; smaller bins will need more protection. If you plan on keeping your bins outside, they can be insulated with blankets, burlap, straw, insulation foam, or other material as long as some gaps are left for air. If worms are kept outside and insulated, they will need less food over the winter months. The typical rate of feeding is 1lb of scraps per 1lb of worms a day, but in colder temperatures, this will be significantly reduced.

Another good option is to bring the bin indoors, where it will be much easier to maintain a steady temperature above 55°F. If worms will be stored in a garage or cold basement, keep them off cold floors. With proper safety precautions, a seed starter heating pad or space heater can be used to maintain temperatures and avoid freezing.

“Easier yet, keep worm bins inside where they can be kept in a heated basement or closet,” Little says.

The most recommended species of worm for vermicomposting, Red Wrigglers (Eisenia foetida), are most active at temperatures between 55°F to 77°F. While worms don’t exactly hibernate, they do slow down at cooler temperatures and will die when it gets close to freezing which is why it’s important to maintain a minimum temperature of around 55°F.

“A great way to keep an eye on the temperature of the bin is to use a compost thermometer, which is great for other compost projects as well,” Little says.

Worm bins should not smell bad. If they do, it usually means they are being overfed or there is too much moisture in the bin.

It’s also important to check on them every week or so to ensure they have adequate bedding and moisture. Due to the drier air conditions in winter, the bedding which typically consists of shredded paper or cardboard should be spritzed with water and moved around a bit to ensure airflow and moisture.

Whether keeping worms outdoors or bringing them in for the winter months, keeping them warm is key to having a happy worm that will produce nutrient-rich vermicompost for your garden.