Quiz Answers: How well do you know weather part 2! 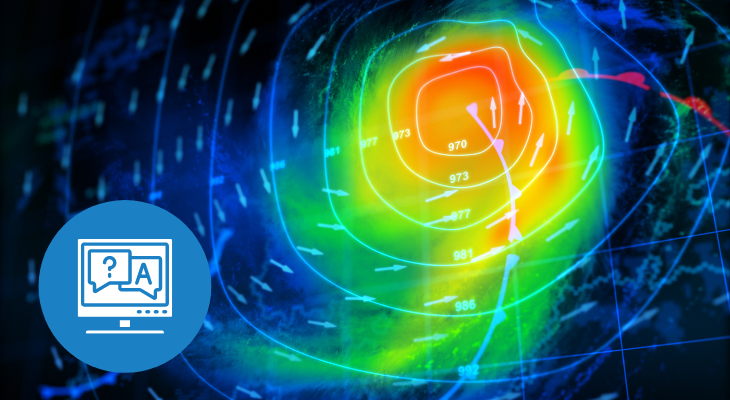 In December, I provided a weather quiz post, the second one I’ve done. Here are the answers. How did you do this time? Let me know! We’ll try another quiz later in the year.

1. True or False, the United States experiences a monsoon.

True: The southwest part of the United States experiences a monsoon during the summer. Moist air flowing up mountains in New Mexico and Arizona along with the very warm air present in that area creates strong afternoon thunderstorms. Unlike the Southeast Asian monsoon, the rain is isolated and not as continuous.

Snow: Like almost all precipitation away from the equator, it starts as snow that forms thousands of feet above ground. With freezing rain, the snow is melted by a warm air layer relatively close to the ground, falling through another shallow cold air layer at ground level. The cold rain doesn’t have a chance to freeze before hitting ground, but freezes on contact with trees, cars, and other objects.

Sun and Angle: The higher the sun is in the sky, the more intensely the earth’s surface is heated.  The sun reaches its highest point in the sky on the first day of summer for those living north of the equator.

The 1800s. Both Eunice Foote and John Tyndall independently found that carbon dioxide would absorb and emit heat in the 1850s, long before there was any discussion of climate change. Others related this to the greenhouse effect in the late 1800s – again long before climate change became a thing.

This happens quite often in the atmosphere, when the air is lacking enough particulates such as dust or pollen for condensation to take place. Sometimes water can remain a liquid until reaching almost -55°F. This causes a lot of concern in the aviation world as the supercooled liquid will instantly freeze on wings.

6. According to a 1970s song, this never happens in Southern California.

Rain! While Southern California receives little to no precipitation from April through November, they are often affected by “atmospheric rivers” from December through March.

7. As air sinks in the atmosphere, these two things happen to it.

As air sinks in the atmosphere, these two things happen to it.

Sinking air in the atmosphere gets compressed. It is moving into higher air pressure as it moves downward. This in turn pushes the air molecules closer together, making them bang into each other more, causing the air temperature to increase. So, sinking air compresses and heats. A real-world example of this is Chinook winds that come down off of mountains.

8. True or False, Home runs are more likely when the air is dry.

False! Water vapor is a gas that is lighter than oxygen or nitrogen. When there is a lot of water vapor present, the heavier oxygen or nitrogen molecules are pushed aside. Lighter air means less resistance. If you want to see the long ball, go on very muggy days.

Fair weather: High pressure typically brings fair weather. Higher air pressure is associated with sinking air. Sinking air warms, which increases its ability to hold water vapor. This inhibits the chances for precipitation or even cloud formation in some cases.

MEET THE AUTHOR: Duane Friend is an energy and environmental stewardship educator with University of Illinois Extension, serving the organization in many roles since 1993. Duane provides information and educational programs to adult and youth audiences in the areas of soil quality, weather and climate, energy conservation, and disaster preparedness. These programs provide practical solutions for families, farms, and communities.  He assists families in creating a household emergency plan, farmers with the implementation of soil management and conservation practices, and local government officials and business owners with energy conservation techniques.