Rivers in the air: Atmospheric rivers can lead to lots of West Coast rain

We all have been hearing about the mega-drought occurring in the west. California has been hard hit, with many of its lakes at record lows. Water managers in that area always hope for a good winter precipitation season to replenish some of the water that is sorely needed. While most of the moisture would come from snowpack in the mountains, another form of heavy rain may also occur near the coast that is called an atmospheric river.

It really can rain in Southern California 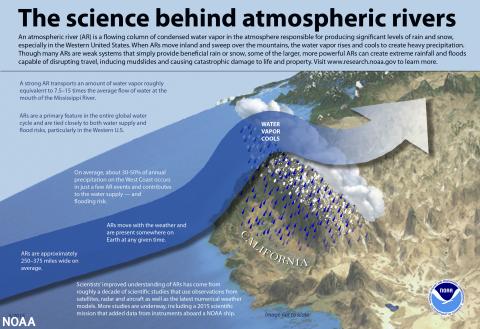 As the 1970s song says, it can pour in Southern California, especially from November to March.

Central and southern California are shut off from storm systems during spring, summer, and most of fall by a large area of high pressure called the North Pacific High that migrates north from its winter position. In winter, the high migrates slightly south, allowing storm tracks to move through more southern parts of the state.

Sometimes the polar jet stream will take a big southern dip in the Pacific, and in the process pick up a lot of moisture and warmth. This juicy stream of air then heads to the U.S West Coast, where it encounters mountains. Another name for this air is called the Pineapple Express.

The moisture-laden air rises up the mountains, cools, condenses, and produces rain. A lot of rain. In a short time. One to 3 inches of rain can occur over a 24- to 72-hour period. Remember a lot of this water is running down mountains, some of which have had wildfires and are bare of vegetation. Mudslides become a major concern, as well as dam breaches, as occurred at the Oroville Dam several years ago. This intense form of rain and the sediment in the runoff is not the best way to replenish lakes that are currently low. 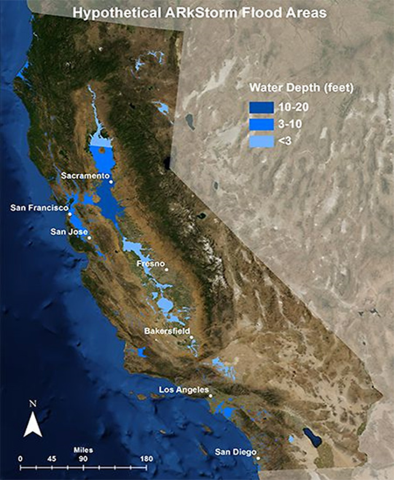 Research shows that these atmospheric rivers can last for extended periods of time. In 1861, one lasted for almost six weeks in central California, swamping the new town of Sacramento.

It appears these long-lasting events and the megafloods associated with them have occurred on average about every 150 to 200 years. Whenever the next one does occur, it will likely be a very devastating event, considering the population of the area. Below is a map from the U.S. Geological Survey showing areas of potential flooding.

ABOUT THE BLOG: All About Weather explores the environment, climate, and weather topics for Illinois. Get in-depth information about things your weather app doesn't cover from summer droughts to shifting weather patterns. Never miss a new post! Sign up for our email list.

MEET THE AUTHOR: Duane Friend is the Illinois Master Naturalist Coordinator and Climate Specialist with University of Illinois Extension, serving the organization in many roles since 1993. Duane provides information and educational programs to adult and youth audiences in the areas of soil quality, weather and climate, energy conservation, and disaster preparedness. These programs provide practical solutions for families, farms, and communities. He assists families in creating a household emergency plan, farmers with the implementation of soil management and conservation practices, and local government officials and business owners with energy conservation techniques.