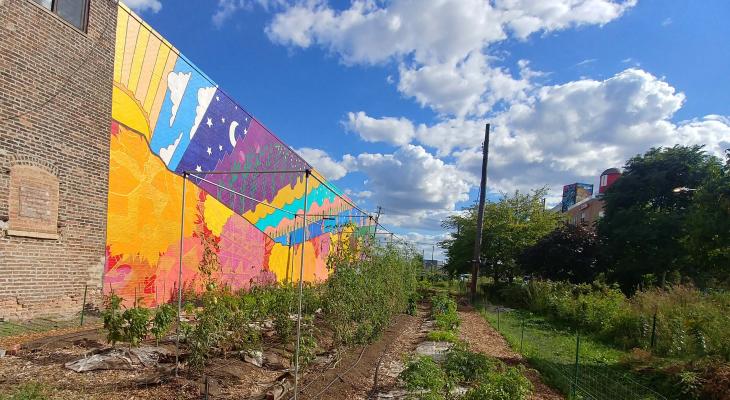 Paula Acevedo talks quickly and passionately pointing left and right as we walk through El Paseo Community Garden. “This is a work of love,” says the 2016 graduate of the Master Urban Farmer Training Program, MUFTP.

We pass an apiary, the senior and family raised bed area, the fire pit, public grill, and picnic area, the collective, free, and ADA accessible raised beds, a native prairie strip, a beautiful combo shed and shelter called The Hive, murals and signage in English and Spanish, sites set aside for a nature play area, dog run, and open green space, the community stage used for yoga, dance lessons, outdoor movie nights, and music performances, and the permaculture garden.

Where’s the farm? Matthias Lampe, collective farm lead and MUFTP 2020 graduate, smiles and points it out back the way we came.

“In April nothing was there. Now we have 10 50-foot rows with irrigation, a shipping container for storage, a small seedling greenhouse, plans for a hoop house, and have transplanted the hops to a more ideal location. The farm also includes several rows for commercial food businesses use to incorporate local produce into their menu or products. Did you know Lo Rez Brewing makes El Paseo Pale Ale beer using our hops and donates proceeds to the garden?”

Built on a former rail line, El Paseo Community Garden was founded in 2009 in Chicago’s Pilsen neighborhood. In 2015, Antonio and Paula Acevedo took on the responsibility of stewarding what was at the time a small community garden. They both completed the Master Urban Farmer Training Program in 2016 and used what they learned in class to refine the garden’s master plan. The site now encompasses 1.5 acres and has been awarded numerous grants. 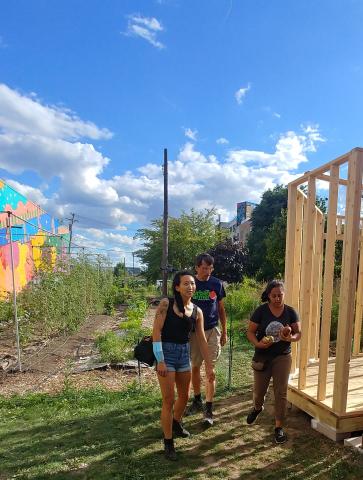 Paula credits project-based leadership and their use of community-based design workshops involving Pilsen area residents for much of the garden’s growth, rather than her hard work and dedicated leadership. She admits, however, she could use someone for the not-so-fun administrative work so she could focus on community programming. The garden leadership team has begun discussions to figure out how to generate a reliable income to support an administrator’s salary.

Retraining volunteers has been a constant struggle and barrier and has at times left Paula and Antonio feeling overwhelmed. However, she’s beginning to solve the age-old problem of volunteer turnover and loss of human capital by identifying and then paying for advanced training for dedicated volunteers. She’s also focused on creating a culture of work and socialization.

“Every Sunday, volunteers work from 10 a.m. to 2 p.m. before heading to the brewery. It’s often a time where our garden volunteers share their individual transformation stories. This makes it feel like home and one big multicultural and multigenerational family.”

Building a community of volunteers

Matthias Lampe, moved to Chicago from Switzerland in 2017 immediately taking a deep interest and leadership role in the apiary. He enrolled in the Master Urban Farmer Training program to learn how to build and run an efficient and productive urban farm.

“Growing up my family had a very large garden with a greenhouse and even a lawn that took three hours to mow. I hated it! So, it’s funny now that this is where I spend most of my free time. I love it here because if you are interested in something, they let you do it.”

Matthias and his wife are moving back to Switzerland at the end of this growing season. Fortunately, Paula’s plan to increase El Paseo’s human capital was already in place with two volunteers completing MUFTP in 2020. Ali Day, current collective lead and 2020 MUFTP graduate, will take over as the farm lead in 2022. “Matthias and I both love the planning! I created my production and rotation plan for the raised beds as a MUFTP homework assignment," Ali says. "I now have a system in place that can be used year after year by future leaders.”

Matthias agrees on the impact MUFTP made on his ability to manage the farm. “My trellis, irrigation, and production plans went from paper to reality. Its mind blowing what we have here now. I also used the spreadsheets to figure out how many seeds or plants were needed to fill a 50 ft row. This allowed me to see I would need more people to help as this is not my full-time job.” Ali, who grew up in rural Missouri but not in a farm family, agrees on MUFTP’s impact.

“We doubled production. By implementing more rigorous spacing and having a plan for the collective beds we grew so much more than we thought possible.” 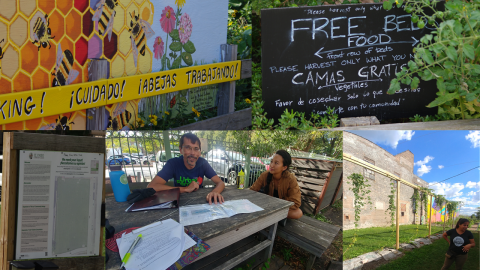 Paula credits MUFTP, in part, for making them look to the future and open their eyes to new possibilities. In fact, these days Paula considers El Paseo an outdoor community center rather than a community garden.

Without a doubt, El Paseo has done its work well preparing leaders for the future. Last year Ali became Associate Board President for Advocates for Urban Agriculture not only because it gives her something to do in the off-season but because civic involvement is important to her and “makes me feel like Chicago is my city.” She plans to pursue more opportunities to advance her urban farming education and looks forward to applying her knowledge on the El Paseo Farm.

When Matthias returns to Switzerland, he dreams of recreating El Paseo. “Ideally, I would work part-time and run the garden in my spare time. Gardening is therapeutic and even spiritual for me. I imagine the Swiss El Paseo focusing on new refugees who might like a place to simply grow and heal.”

Of her future, Paula says, just like most farmers, “this is my way of life, although a vacation from time to time would be nice. We’re planning a road trip in November.”

Ali is a data scientist and Matthias is an IT consultant. Hence their love of systems, planning, and expert use of Excel spreadsheets. Paula is a trained architect and has been instrumental in the site design.

Find out what’s going on in the garden. These fall events include outdoor movie nights, a harvest festival, bilingual storytime and nature play for kids, Wellness Wednesdays, and a Haunted Garden.

If you’d like to learn more about how to leverage project-based leadership, community-based design, or participatory community development to develop your urban farm, contact University of Illinois Extension’s Community Economic Development team.

All photos by Kathryn M. Pereira

MEET THE AUTHOR
Kathryn Pereira is a local food systems and small farm educator with University of Illinois Extension serving Cook County. Raised on the southside of Chicago, her career in agriculture began in 1990 in Mozambique. Later she owned and operated an organic vegetable farm in New Hampshire before returning to the Midwest to earn her Master of Science in Agricultural and Applied Economics from University of Wisconsin–Madison. She regularly volunteers with USAID’s Farmer-to-Farmer Program in southern Africa and is passionate about improving small farmers’ income and quality of life as well as consumers’ access to local foods. She provides workshops, technical assistance consultations, site visits, and referrals to resources for urban and peri-urban food system projects, organizations, commercial farmers, and residents interested in urban agriculture and local food systems.