Perseverance and patience grow an urban farm in West Pullman 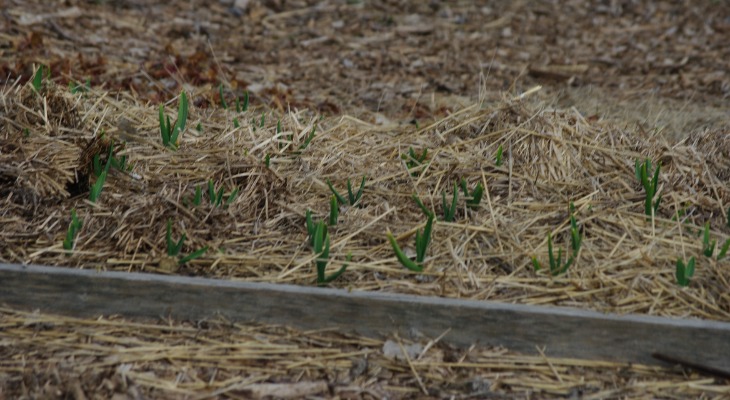 On a warm spring day with four varieties of garlic just beginning to poke out of the ground, Natasha Nicholes, urban farmer and Chicago native, describes her vision for the corner of 120th and Union. “The original site here on northwest corner will be a community gathering and learning space which will extend west to the bike path with a children’s nature play area. Over there on the SE corner will be the full working farm, with a farm stand located on the SW corner. I want to see my community gathering outside and black folks growing food.” With a full rendering of the vision from Studio Gang, Natasha figures she needs to raise half a million dollars to bring the vision to life. 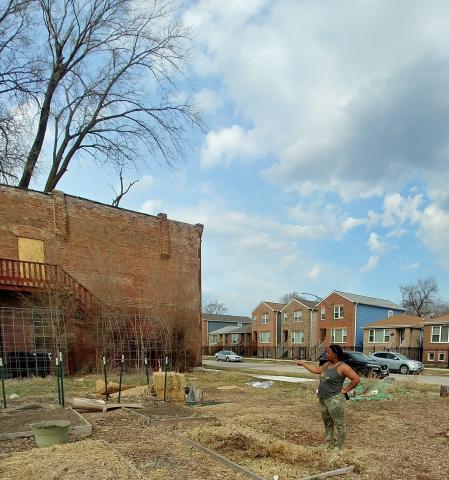 Natasha’s journey began in while participating in the Illinois Farm Families Program in 2013. “When I stepped on to my first farm, a very large row crop operation, and saw the kitchen garden in front of the house something clicked,” says Natasha. “I wanted bring that concept to my home and family in the city.” With that in mind Natasha began seeking out educational opportunities to figure out how to grow food. She started by growing in pots on her back porch, attending conferences, taking classes, all while developing a career as a blogger detailing her life with twins and offering urban homesteading tips on homeschooling, DIY projects, gardening, and cooking. Around 2016 she landed on the hashtag #wesowwegrow to document her food growing experiences. In 2019 she found and completed University of Illinois Extension’s Master Urban Farmer Training Program (MUFTP).

From pots to garden to farm

Between 2015 and 2019 Natasha moved from East Garfield Park where she grew in pots to a new house with a backyard in West Pullman. Her new block had quite a few empty lots, so she approached her alderman about starting a community garden. While the alderman was very supportive, her neighbors were not. They asked, “why would I pay for space when I can just do that in my own backyard? It won’t get stolen if I grow there.” Natasha didn’t give up. Instead she began using two lots to grow on a larger scale for her family. She gave away excess to her neighbors and friends slowly developing her educational mission of “furthering farming in urban areas.” In 2019 she registered We Sow We Grow as a non-profit focused on uniting community by growing food.

"The farm has unified the community."— Natasha Nicholes

Currently four other families on the block grow their own food in their backyards and the entire block is supportive and protective of the farm. “The farm has unified the community. There is an ownership that doesn’t just come from my family. My neighbors have eyes on it, and I didn’t have to ask them to do it, they just do it. They realize it is something to protect and support,” says Natasha.

These days, the We Sow We Grow Project’s urban farm, Union Avenue Community Farm, occupies about ¼ acre and produces food primarily for donation and home consumption. Natasha also produces cooking videos to demonstrate how to use fresh produce and hosts online webinars to teach people to grow their own food. In 2021 they hosted 87 volunteers who contributed more than 500 hours of farm labor. All volunteers went home with fresh garden produce. Many of these volunteers came from a partnership with Friends of the Forest Preserves of Cook County. Farm plans for 2022 include sales of fresh produce and honey at an on-site farm stand, building 64 three-foot high raised beds, and fencing the entire site. To earn additional income, the farm operation will utilize Illinois cottage food laws to include sales of canned products like pickled okra and dilly beans at the farm stand. These laws allow food entrepreneurs to prepare foods like pickles, jams, and baked goods in their home kitchens to sell directly to consumers. To help solve the ever-present challenge of figuring out how to fund everything she wants to do Natasha has been digging deep into learning more about the business aspects of farming— bookkeeping, business planning, and tackling grant writing.

Extending community beyond the block

“The meaning of our name has expanded. Instead of just sowing seeds in the ground and growing food, we now sow seeds to grow community,” Natasha explains. In 2021 they decorated 50 homes in West Pullman with wreaths and holiday lights. Next year they plan to extend their efforts to entire ward. She hopes to turn one of the empty lots into a pumpkin patch so that every house in the neighborhood can have a Halloween pumpkin. Eventually, Natasha sees We Sow We Grow developing into a space that serves all children by helping them see how all life is entwined with food and just how amazing the world is. She imagines the farm as an outdoor boys and girls club where children would be allowed to take on farm tasks while still just being kids.

“One of the benefits of being an MUFTP student was that it helped expand my urban farming community. I continue to learn from my instructors and fellow students,” says Natasha. For example, Mary Harkenrider, Precious Blood Urban Farm and MUFTP 2019, often bikes over to visit and shares information on grants and resources. Her instructor, Zack Grant, was a presenter at the first two We Sow We Grow Summits. “These connections lead to more connections expanding my community beyond my neighborhood to the entire state and potentially to the world.” 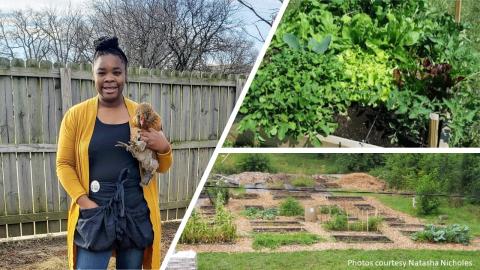 One of Natasha’s major farming lessons came as she was beginning MUFTP. Her younger brother was involved in a car accident and in the hospital. She found it very difficult to push forward and go to class. “I almost quit every week that year,” says Natasha, “I was not in a good place.” Her brother, however, told her in no uncertain terms, “go to class” before eventually succumbing to his injuries and passing away.

"You need to show up daily for the farm, the organization, and the community."—Natasha Nicholes

Natasha reflects, “I learned through showing up every week to class about perseverance and how much you need it to be a farmer. You need it in ways other than putting seed in soil. You need it when the sun comes up and your muscles are aching. You need it when a predator has gotten into a chicken coop or someone has stolen equipment or produce from the garden. You need it when making plans for soil health and preventing pests and diseases. You need to show up daily for the farm, the organization, and the community. I don’t think I would have as much fight if it didn’t happen that way.”

Like many farm families, home, farm, and work life is intertwined in the Nicholes household. Natasha’s four kids and husband regularly help on the farm and it’s “all hands on-deck” when it comes to home schooling the younger three children. Natasha’s off-farm job managing a digital media site, Houseful of Nicholes, features her family. She even has a spin-off Etsy shop as an outlet for her crafting addiction. Like many farmers and entrepreneurs, she shrugs off the question of life balance. “How does anyone balance their life? If something frustrates me, I hit pause because I’ve learned if I power though I mess up. And I don’t like messing up. I clear my brain and come back to it with patience.”

Favorite thing(s) to grow: “I get giddy when I grow a watermelon! They mean summertime and family. It’s a symbol of reunions. As a kid I went to the fruit stand with my grandpa to pick them out. Somehow, he always managed to get the sweetest juiciest watermelon. I wish he could have lived long enough to see me grow them.”

Shhh… it’s (was) a secret: After realizing she did not want to be a doctor, Natasha served in the Navy as an Aviation Administrationman (AZAN). So, it’s not surprising she uses the phrase “all hands-on deck” to describe her family’s home-schooling operations.

All photos by Kathryn M. Pereira unless otherwise attributed.

Kathryn Pereira is a local food systems and small farm educator with University of Illinois Extension serving Cook County. Raised on the southside of Chicago, her career in agriculture began in 1990 in Mozambique. Later she owned and operated an organic vegetable farm in New Hampshire before returning to the Midwest to earn her Master of Science in Agricultural and Applied Economics from University of Wisconsin–Madison. She regularly volunteers with USAID’s Farmer-to-Farmer Program in southern Africa and is passionate about improving small farmers’ income and quality of life as well as consumers’ access to local foods. She provides workshops, technical assistance consultations, site visits, and referrals to resources for urban and peri-urban food system projects, organizations, commercial farmers, and residents interested in urban agriculture and local food systems.