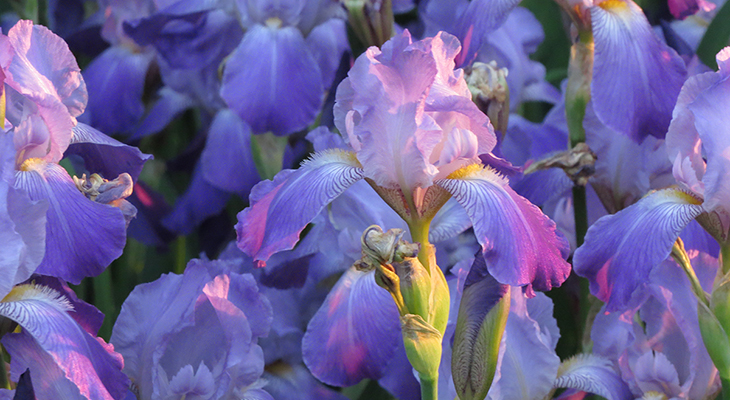 The Greek goddess Iris walked a rainbow pathway through the sky and the flower named for her has a rainbow of flower colors. Iris is one of the oldest garden flowers. Iris is often seen as the only remnant of a long since abandoned home.

Although the most familiar type of iris is the bearded iris, the genus includes 200 or more species, including some North American natives. Species are separated into two major groups - rhizomatous and bulbous. Rhizomes are horizontally growing underground stems that are used as food storage for the plant. The common bearded iris falls into this group as well as the beardless Siberian and Japanese iris.

Bulbous irises form a more typical bulb and include Dutch and reticulate iris. These are planted in October with other bulbs.

The best time to plant and transplant rhizomatous iris is late July through September. Iris loves the heat and drier weather of summer and the summer dividing will reduce the incidence of bacterial soft rot. Most rhizomatous iris should be divided every three to five years. If your iris patch is producing very few flowers, it's time to divide and conquer.

Watch this short 5-minute video on dividing and planting iris from Ken Johnson or read more on his Good Growing blog.

When dividing iris, the iris borer will be a mature pink caterpillar inside the rhizome. The rhizome may look fine until your fingers push through to a mushy mess. Bacterial soft rot often accompanies iris borer damage.

Fall sanitation is important in iris borer control. After the first hard frost, remove and destroy or bury the old iris leaves and plant debris to remove the eggs. In small iris patches the borer can also be controlled by squishing the caterpillar in the leaves in April and May.