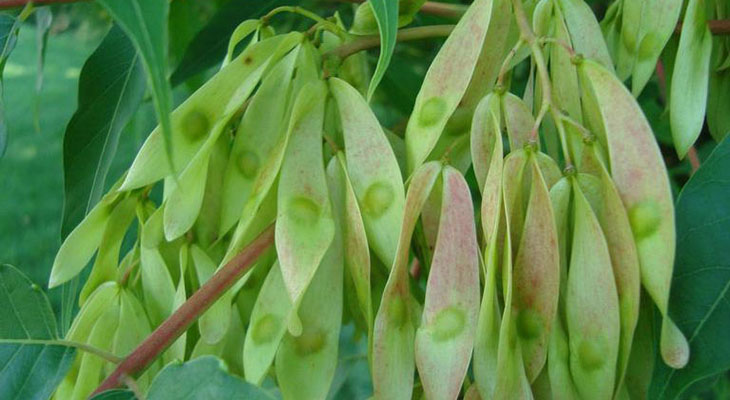 Originally published by Kelly Allsup on May 7, 2021.

If you didn’t know, we are cultivating invasive trees in backyards and urban settings. Tree-of-heaven (Ailanthus altissima) and Amur corktree (Phellodendron amurense) are outcompeting surrounding plants and invading natural areas contributing to the loss of native species in Illinois.

Understanding what makes them invasive, how to identify and control them while reporting species distribution will allow us to prevent further invasion.

An ornamental tree from China, tree-of-heaven is an aggressive invasive species with some detrimental effects on the environment. Its ability to establish quickly in a variety of growing conditions, ability to reproduce rapidly and lack of insect or disease problems made it popular when planning urban landscaping in the past. Now it has become a problem in urban areas that lack proper tree management. The major problem is the tree of heaven crowds out native species and secretes a chemical into the soil that is toxic to surrounding plants.

Many urban dwellers or homeowners know it for its aromatic presence emitted by the flowers in the early summer. The greenish-yellow flowers are produced in long, showy panicles followed by a multitude of samaras ready to germinate in disturbed areas. It also forms offshoots through the roots creating a thicket of trees. It is dioecious so there are separate male and female trees. It has long pointed pinnately compound leaves that resemble sumac or black walnut. The aroma of the flowers and leave (nutty or stinky), lack of serration on the leaflet, and seeds in the middle of the samaras glandular, notched base on each leaflet are key to identifying this species.

Another major concern about this invasive species is it is the preferred host plant to a potentially devastating invasive leafhopper called spotted lanternfly (Lycorma delicatula) meaning eggs will be laid on this tree. his insect can cause serious damage to a multitude of plants and is a huge concern for

The most effective way to control tree-of-heaven is to pull seedlings by hand before the taproot develops. If the plant has matured, cutting alone will only help temporarily by reducing its ability to spread but resprouting will occur. Cutting down the tree will also cause it to root sucker producing more trees. Personally, I have seen continual sprouts pop up several feet away from a thicket of the trees. University of Illinois suggests chemical treatments to control this species.

Amur corktree is native to Eastern Asia. It was originally introduced and is still being planted as an ornamental and street tree. In Illinois, it has been reported as invasive in the northeast in Cook, DuPage, and Will Counties, and in Jackson County in southern Illinois, though it is likely underreported in the state. Again the same reasons it has been proliferated as a landscape tree makes it bad for the environment. Its ability to adapt to a wide range of growing conditions gives it the ability to outcompete native species.

Amur corktree has opposite pinnately compound leaves that turn yellow-green in the fall. To correctly identify remove a piece of the corky outer bark to reveal bright yellow inner bark. Like tree of heaven, amur corktree is dioecious so there are separate male and female trees. The females produce dark berries that are distributed by birds.

Seedlings can be hand-pulled foliar applications of chemicals may need to be made to prevent this tree from resprouting.

ABOUT THE AUTHOR: Kelly Allsup is a Horticulture Educator for University of Illinois Extension serving Livingston, McLean and Woodford Counties. She meets the educational needs of her community, including local chapters of Master Gardener and Master Naturalist volunteers, through expertise in home horticulture and entomology. Her passion for ecologically-friendly gardening and all things plants makes her a dynamic speaker on topics that range from beneficial insects, growing vegetables and fruits, to urban trees.